(Updated with photos below)

This past Friday, my 6th grade son had a "Father & Son learning together" morning at his yeshiva, in which parents come to learn with their children in their classroom using the rebbe/teacher's prepared sheets with questions.

The parents and children review the material (in this case, it was from Parashat HaShavua), and together work out the answers to the questions.

Who did I see in my son's classroom? Moshe Feiglin was there learning with his son. Moshe's the ideological leader of the Manhigut Yehudit movement within the Likud party.

Member of Knesset, Michael Ben Ari came in as well to learn with his son.

One parent was not there -- Rabbi Meir Chai. He would have been at the one hour learning program that morning with this son, but he was killed by terrorists a week earlier.

The previous Friday, one week earlier, I drove to Jerusalem with my oldest son for the funeral of R' Meir Chai. I took some photos while I was there, and wrote up some thoughts, but didn't get around to posting it till now. I'll post the photos later on.

The word was yelled out by Eliyahu -- the 16 year old teenage son of Rabbi Meir Chai, murdered in a Palestinian terrorist attack on the roads of the Shomron this past Thursday afternoon.

The first word of the eulogy was yelled out in pain, in sorrow, in mourning.

That first word of the eulogy, the hesped, "Abba"

The painful yell continued, lasting a lifetime, as it reverberated throughout the neighborhoods of Jerusalem, echoing in the hills around us.

I brought my oldest son to the funeral -- as he went to school with Eliyahu Chai, is friends with him, and used to frequent our home as well. Before the funeral was about to start, my son asked me what to do. "Go over to your friend...give him a hug."

And Eliyahu hugged my son, sobbing on his shoulder.

I was shocked by the power of the hesped which Eliyahu delivered.

"Hakol LeTova, HaKol MiShamayim", Eliyahu sobbed into the microphone, repeating this over and over again. "It's all for the best, it's all from Heaven."

Hearing a son eulogize his tragically murdered father -- with such faith that he could repeat "HaKol LeTova" was shocking.

“To all the youth here - you are the best youth there is; I salute you, and I say the same to all our soldiers and to the entire army, to each and every one of you."

“Continue Abba’s path: Abba wanted faith! Abba wanted Torah study! Abba wanted prayers! Abba couldn’t bear to see youth without tefillin… If we want to immortalize Abba, then we have to do things like that – not external things.

Eliyahu looks like the classic settler "hilltop" youth, lambasted by the media. Long paeyot, a large white knitted kippa. I don't think the media was prepared for what he said next.

Do not look for revenge, not to beat up Arabs. This is not our solution. The difference between us and them is, that we are human beings! We won’t go to them and kill them just like that; if they come to us [to attack us], we will kill them and put a bullet in their heads, but we won’t go to them!

We are human beings

Eliyahu described his own personal relationship with his father, and the painful recollection was challenging to all the teenagers there.

"Two years ago, I told you that I didn't want to wear a kippa anymore, or payot, or tefillin, or keep shabbat...and this hurt you."

Eliyahu concluded his words with a heart-rending shout, “Abba, I love you! I so much tried to tell you…”

Thousands attended the funeral in Jerusalem 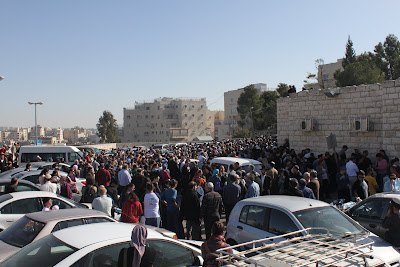 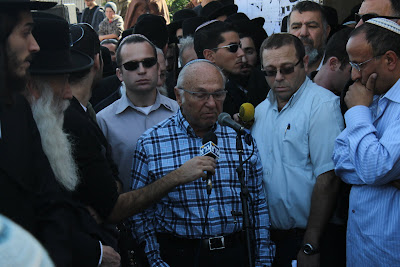 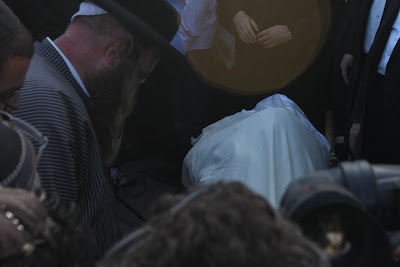 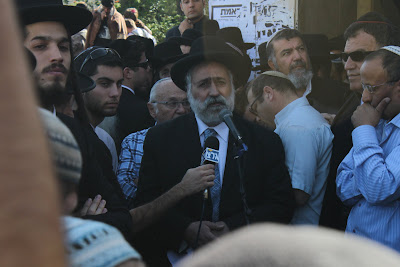 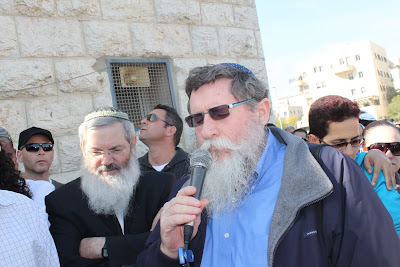 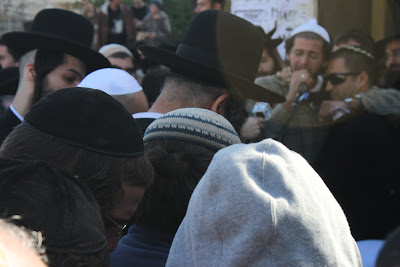 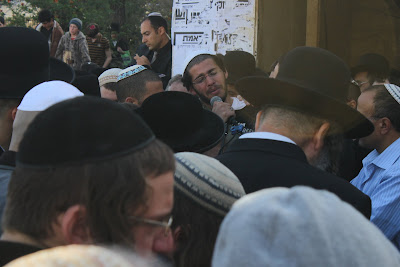 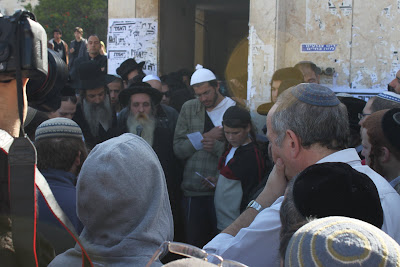 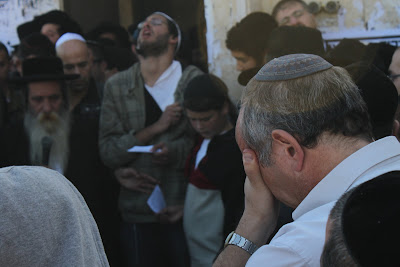 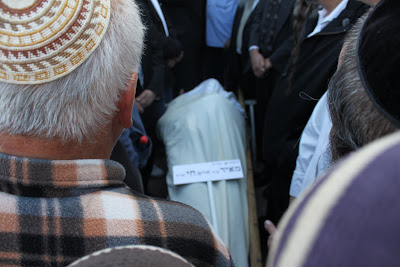 May the Chai family be comforted among the mourners of Zion and Jerusalem.

There are no words.

Thanks for sharing this.

Rachmonah L'tzlan that a 16 year old should have to give a hesped for his father. May Hashem comfort this family and may they know no more tzar.

May HAshem save Am Yisrael.

When I saw the pics and heard the video, the emotion reverberated thru me. Heart wrenching.

When the accumulated suffering of these courageous neshomas reaches its full, Moshiach must come.

This young man's words and example are all the more remarkable given his young age and the tragic proportions of his loss. What a kiddush haShem!

May HaShem grant Eliyahu and his family comfort and strength. If this is the portrait of the young man -- in the face of such huge personal loss -- at 16, then... WOW. Just. WOW.

heartrending, thank you for sharing this.

(Again) I am sitting here reading this, and crying; there are no words; I am sending this post to my children, and I would like to cross post it on my blog (is that ok with you?)

You've brought tears to my eyes with this post. What a tragic loss for Am Yisrael, what strong emunah that young man has and how very sad that it had to be expressed davka at his father's funeral.

This was the most powerful thing I read today.
Thank you.

Meir Chai was a friend of my brother and sister-in-law. His father-in-law is their Rav in Musrara. Your account gives us a slice of the chilling heartbreak and helped me personally feel that sense of hishtatfut ba'tza'ar with my brother in his pain, and with the Chai family in the midst of their immense sorrow. Thank you for sorting out your impressions into this crucial post.