Time Magazine is bold enough to rise above the political correctness epidemic which is infecting US policy and administration -- and criticizes the official US military report on the Ft. Hood massacre.

The U.S. military's just-released report into the Fort Hood shootings spends 86 pages detailing various slipups by Army officers but not once mentions Major Nidal Hasan by name or even discusses whether the killings may have had anything to do with the suspect's view of his Muslim faith. And as Congress opens two days of hearings on Wednesday into the Pentagon probe of the Nov. 5 attack that left 13 dead, lawmakers want explanations for that omission.

John Lehman, a member of the 9/11 commission and Navy Secretary during the Reagan Administration, says a reluctance to cause offense by citing Hasan's view of his Muslim faith and the U.S. military's activities in Muslim countries as a possible trigger for his alleged rampage reflects a problem that has gotten worse in the 40 years that Lehman has spent in and around the U.S. military. The Pentagon report's silence on Islamic extremism "shows you how deeply entrenched the values of political correctness have become," he told TIME on Tuesday. "It's definitely getting worse, and is now so ingrained that people no longer smirk when it happens."

Its about time -- and this isn't rocket science. 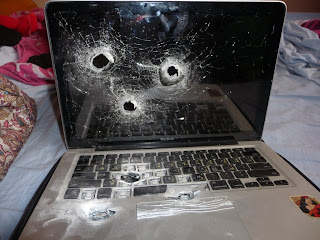 Remember all the flak Israel got for shooting up the laptop of a "peace activist?" Ever wonder why Israel's security might do such a thing?

FoxNews has a story from just a few hours ago:

BERLIN — Part of Munich airport was closed for hours Wednesday as officials searched for a man whose laptop had triggered an alert for possible explosives at a security checkpoint, police said.

Federal police said they ordered part of the airport's Terminal 2 closed to look for the man following the incident at 3:30 p.m.

An airport security instrument alerted officials to possible explosives as the man's laptop was being checked, police said. He then hastily left the scene carrying the computer into the terminal.

The alert "doesn't necessary have to mean that there were explosives inside," federal police spokesman Albert Poerschke told the German news agency DAPD.

Officials wanted to check the computer again, but the man left. "We believe that the man didn't realize there was more to come," Poerschke said.

Munich airport said the terminal reopened shortly after 6:40 p.m. and that more than 100 departures were affected by the scare. Air traffic was expected gradually to return to normal during the evening.

I still think the shooting the laptop of a silly overreaction. They had the woman in a room, the item wasn't a "chefetz chashud".

I agree with Abbi. The comparison is about as absurd as saying that Israeli security is justified in shooting people in the midriff because sometimes that's where bombers wear their bomb-belts. Especially in view of all the fuss people make about Israeli security checking people, not things.

Unrelated, the term "politically incorrect" is itself, ironically, un-PC, since it implicitly puts down those who are un-PC. The correct term should be "politically preferred." So far, I haven't made a lot of progress in this.

yoni r.: Unrelated, the term "politically incorrect" is itself, ironically, un-PC, since it implicitly puts down those who are un-PC.

Israeli Pluralism - everyone's opinion is valid, except yours.

Israeli Pluralism - everyone's opinion is valid, except for right wingers, datiyim, chareidim, and those living outside of Medinat Tel-Aviv.

it's quite ludicrous to pin the fort hood massacre down to anything but muslim fundementalism. he shouted "ALLAHU AKBAR" just before hand.