(IsraelNN.com) Special Yassam units have destroyed a synagogue in the Shomron-Binyamin community that was built after the construction freeze was announced.

The Torah scrolls were first removed from the building, and the bulldozers began the destruction shortly afterwards.

Earlier this morning (Tuesday), it was reported that large police forces and special Yassam units had arrived in the Talmonim bloc and prevented entry to the communities of Dolev, Neriah, Talmon, Nachliel and Haresha. They thus wished to prevent residents from arriving en masse to thwart their destruction of a synagogue in Nachliel, said to have been built in violation of the two-month-old construction freeze....

The destruction of a synagogue, especially in Israel, is considered very serious, in terms of both religious sensitivity and the efforts, in the words of the Knesset Law Committee, to "prevent harm to synagogues around the world."

After the Disengagement/expulsion from Gush Katif in 2005, the government originally planned to destroy the synagogues that remained in Gaza, in order to avoid their desecration by local Arabs. However, even this fear was not considered sufficient reason to destroy those holy sites, and following opposition by rabbis around the country and much debate, the decision was rescinded.

Here's a few photos of other people gleefully destroying shuls: 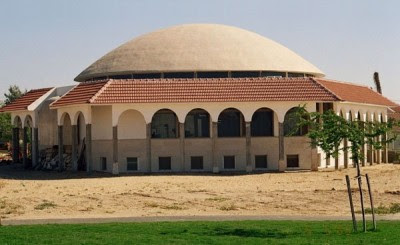 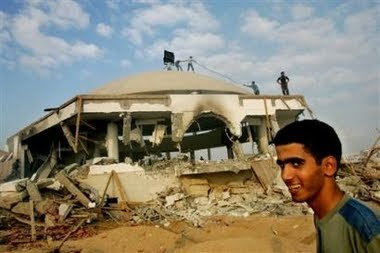 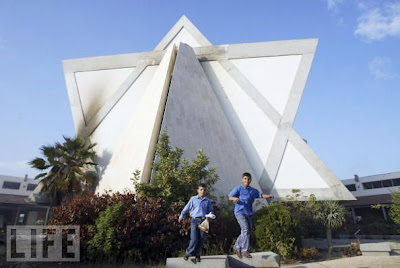 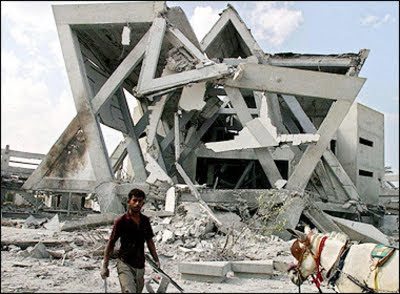 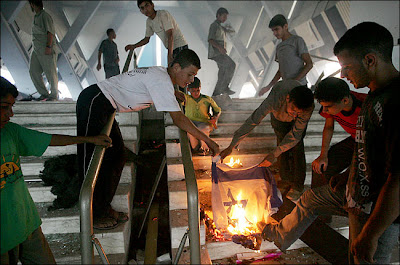 When was the last time the government tore down illegally built masque?? Trust me there are many of them.

Wow, is he in for it! Gush Katif was collective, but this is solely HIS. Just too evil for words.

What midda kneged midda awaits him... in this world?

This seems like a big deal. Why is it not reported in the mainstream media?

Gary: Unfortunately, the police destroying a shul in the Shomron is not a big deal...its only settlers...and religious ones to boot.

The pics you have are a little confusing. I think they were pics of the shul destroyed today. It took me a minute to realize they weren't.

Not that I'm condoning the IDF's actions (far from it), but what was going through the minds of the people who put up the shul? Did they think that Barak wouldn't order its destruction? Does lifnei iver not apply when there are political points to be gained?

Abbi's right - I saw those photos and said wow they built those in only 2 months?

Apparently, the shul was built before.
They allowed only the torah scrolls to be removed and then destroyed everything else.
What kind of Jewish soldiers were part of this?

There are times when I wish Jews instill the same kind of fear into Israeli politicians as the Arabs do and this is top of the list. This was a despicable act and I hope justice finds him quickly.

Before they destroyed the synagogue, did the army affix to it a sign reading "Holy Place" -- like they did in Gush Katif, just before turning the synagogues over to the Arabs to destroy?

Hm, I wonder why not. Was this synagogue less holy?