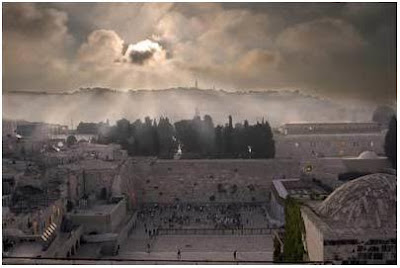 "Jerusalem Day was created by law as a national holiday. And yet the nature of celebrations in Jerusalem and the identity of those dancing in the streets today teach us that the national holiday in its current form more resembles a sectoral holiday. To be honest, most of the main events in Jerusalem have long been held under the auspices of the religious public." [ynetnews]

It's unfortunate, but mostly true.

When it comes to the demonstrations on behalf of the Land of Israel, the vast majority of those present are religious. The celebrations for Jerusalem are organized by religious organizations.

Who is supposed to foster the connection to Jerusalem?

- Ehud Barak offered to split the city with Yassir Arafat at Camp David.

- Ehud Olmert and Tzippi Livni offered it to the Palestinian Authority

- Netanyahu is freezing building in Jerusalem.

- Earlier today, a group of 60 Jews marching in Jerusalem on Wednesday afternoon were pelted with stones after taking a wrong turn and entering the Jerusalem neighborhood of Shuafat. [ynetnews]

- Earlier today, some 50 left-wing activists held a rally in the Jerusalem neighborhood of Sheikh Jarrah, in protest of the eviction of Palestinian families and the entry of Jewish residents. Two of the demonstrators were detained. [ynetnews]

- Yossi Sarid's blessing for Jerusalem Day is for the city to be split, soon. [srugim]

If Arabs can live wherever they wish, why can't Jews?

And make it a national day of education and celebration, a day off from work.

Otherwise, only those deeply attached to it will celebrate.

The mainstream youth of the left doesn't show up to demonstrations without free buses and free Aviv Gefen concerts.

If we're going to encourage Jerusalem awareness to those who aren't that committed, its going to take a lot more incentive.


Visiting Israel?Learn to Shoot at Caliber-3 with top Israeli Anti-Terror Experts!Wherever I am, my blog turns towards Eretz Yisrael טובה הארץ מאד מאד
Posted by Jameel @ The Muqata

it may have been non-dati politicians who spearheaded those plans to weaken jewish jerusalem control over jerusalem, but these plans didn't stop from dati politicians from remaining in the government

Yearn for Yerushalayim.
Educate.
And make it a national day of education and celebration, a day off from work.

Bibi's government will never do this, because -- if for no other reason -- it would make Obama angry at him.

This fact, in and of itself, shows just how unimportant Jerusalem has become to our leadership.

Even if they are all bad.

The problem is with the waning of Zionism - most Israelis no longer care about Jerusalem or what happens to it.

For Israel's politicians, the city is just another block of real estate to be chopped up for the right price. There is nothing intrinsic holy about Jerusalem to them.

Only if you believe Jerusalem is the City Of G-d, can you believe it should neither have Jewish construction banned within it or have it be divided with the Arabs.

We have come to a point in a generation where Jerusalem has no real meaning for most Jews. And that more than anything else is the far greater tragedy than the disappearance of the old consensus about the city being the united and eternal capital of the Jewish State.

Every civilization on earth that has died out has perished because it lost faith in itself, not because its enemies subdued it. In other words, the Arabs can never destroy Israel but the Jews may end up doing the job for them all the same.