As a note...all times reported here are Israel Summer Time (GMT +3)
Links fixed...Israel offset time fixed. Thanks for the heads up.

10:35 PM As if being attacked by the U.S.S. Enterprise wasn't enough...Israel has unleashed a new weapon upon Hizbullah. Enemy forces are reeling. (h/t Sandmonkey)

9:54 PM According to Al'Jazeera Hizbullah is agreeing to the deployment of Lebanese army troops in the South of the country. (ed. note - Not that they'd care, since they could walk over the Lebanese army in a heartbeat, as well as up to half the soldiers being Shi'ites anyway.)

9:48 PM Many foreign Yeshiva students forgo the summer break (bein hazmanim - between the 9th of Av and the first day of the Hebrew month of Elul) to stay in school, saying psalms and learning Torah during this time of war.

9:20 PM And on to other news...Hizbullah drone shot down near Haifa. It is now permissible to publish that 2 soldiers from the Tank corps were killed in action in Bint Jabaeil this morning.

8:08 PM It's officially offical. And I got the press release from Ms. Whittle about the same time that came out.

Reuters has withdrawn from its database all photographs taken by Beirut-based freelance Adnan Hajj after establishing that he had altered two images since the start of the conflict between Israel and the Lebanese Hizbollah group. 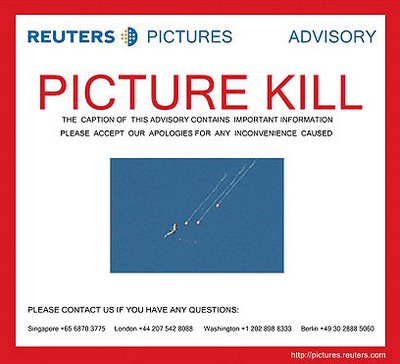 7:39 PM Still no official word on Reuters about the pulling of the second picture. Ms. Whittle stated she would send me the press release, but it is still forthcoming.

4:48 PM Breaking News in Reutergate! Second picture by Adnan Hajj published by Reuters withdrawn for being doctored! Orignal seen here (LINK DEAD). Further info on scandal here. As heard on Fox News. I've just gotten off the phone with Moira Whittle Head of PR from Reuters-UK who has confirmed this. Further information as it comes out.
For those just tuning in... 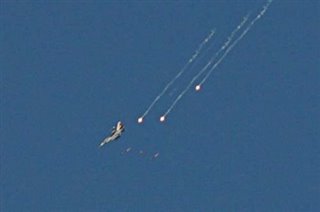 Was published Aug 2, by Reuters with the caption:

My Pet Jawa has done an excellent job of showing how the picture was doctored and that the plane is actually dropping only one defensive flare rather then firing 3 missles. A very in depth analysis can be found here.
4:13 PM Soldiers from the elite Duvduvan unit capture wanted terrorist leader in Kalkiya area.

4:10 PM 6 Hizbullah terrorists killed in heavy fighting around Mis A-Jabaeil. Bring the total to 8 killed in the town. Caches of weapons have been located including RPGs.

3:30 PM Shoshi Grinfeld, the sister of Yehuda Grinfeld one of the soldiers killed in Kfar Giladi who was a resident of the Michmash a community in the Binyamin region of the West Bank, called on soldiers to refuse to serve in Lebanon. She stated

"This war is a direct result of the expulsion (from Gush Katif). They expel us and then send us the war they caused, so they can once more throw us out of our homes, because they know we'll go back and fight for them. I'm begging all the K'tumim (Oranges - a reference to the orange ribbons and shirts worn by those opposing the expulsion for Gush Katif)return home now, before you come back in a coffin. This is a war for nothing, simply to prop up the elites in this country, it's a crime. Please don't go."

With thanks to Cox and Forkum.

12:25 PM 5 Katyushas land in Tiveria. No report of injuries.

11:58 AM The army has released that one soldier was killed in Bint Jabaeil. Four more were wounded lightly. At least 5 terrorists killed in same action.

10:43 AM Reports coming in of casualties amongst troops in S. Lebanon. As usual we won't publish details of deaths until official release of information by the IDF. 11 wounded over night, 1 serious. At least 2 injured in anti-tank rocket attack this morning.

9:26 AM Video clip shows rockets that were fired (from in between residential buildings) at Haifa yesterday, which resulted in 3 killed, over 200 wounded.

9:24 AM Clarification from Jameel about yesterday's pictures of soldiers. The pictures shown are NOT from the current war, but from the past few years -- mostly taken in the West Bank. While some may say they are American soldiers, they are definitely IDF soldiers -- you can see from the beret's and insignias on some of them, and their uniforms are IDF olive green. But they are still decent pix, in any event.

Roundup of overnight news Attack on Haifa leaves 3 dead, over 200 wounded. Total of 12 Reservists killed in attack on Kfar Giladi. 1 soldier wounded seriously, 4 lightly in fighting in and around Mahviv in S.W. Lebanon. Reports of 20+ Hizbullah terrorists killed. 2 truckloads of weaponry desttroyed in battle. Estimates of damage caused by fires that resulted from rocket attacks on forests in the North, 1,500 acres destroyed, will take 50 years to grow back.

Anyone like to speculate where that unfortunately all-too effective targeting information for our enemies came from?

Or did we just get 'unlucky', again?

Baruch Dayan Emet. May their families be comforted in these terrible times.

Hopefully this will end soon. Until then know that our thoughts and prayers are with you.

That picture - hello - my first impression is, you don't drop bombs and then keep flying in their path so that you end up bombing yourself!

I just tried to view the original, and on the Reuters website it says "There was an error viewing the slideshow."

Heh, I bet there was!

The Lebanese originally claimed another "massacre" with 40 dead, miraculously the death toll has fallen to 1!!

The only reason Reuters even pulled the photos is because of blogs that complained about it.

Love the Trek phote - just spun off a post of my own with it!

The Sandmonkey blog you just linked to appears to have been hacked. I hope clicking on the link didn't download a virus or something.

Jameel - We are not at GMT +2 we are at gmt +3 Daylight savings time moves us over one hour!

The real bombing pic in Lebanon.