Trying to win the war?

"We must prevent the continued arrival of a Lebanese army force up to 2 kilometers (1.24 miles) away from the border, before a multinational force is stationed there first...."We will not allow Hizbullah to approach the border with Israel again" (YNETNEWS)

Can someone please help me out here? Hizbolla flags are flying along the border between Israel and South Lebanon (two pictures enclosed here) and yet, Peretz is saying we will not allow Hizbolla to approach the border? 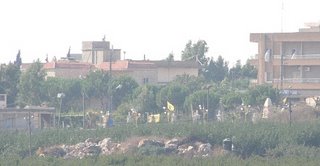 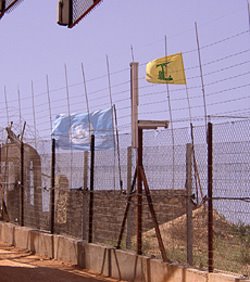 (** please see below -- this second picture does not belong...credit to Ironi B.)

Last week Olmert, Peretz and Livni stated that "the war's objectives have been reached" due to the Lebanese army moving into South Lebanon...yet now Peretz DOESN'T want them there? (without a multinational force?)

And where are our kidnapped soldiers?

Please tell me that I'm missing something...

UPDATED CORRECTTION (Hat-tip: Ironi Burgoni) The second picture above is from before the war, and has nothing to do with the current situation. I'll leave it up as a tribute to Ironi who spotted it. The second picture was sent in by reader "Matthew" with the following credit, as is therefore, indicative of Hizbolla, in fact, being back at the border. The JPOST and other papers have been showing pictures of Hizbolla terrorists in Bint Jebail observing IDF forces thorugh binoculars, but I haven't been able to locate the pictures on-line.

The second picure is from before the war.

You can see it here:
http://michellemalkin.com/archives/005611.htm

So who took the first picture, and when?

Hey Jameel, I hear Reuters is looking for someone to replace Adnan Hajj.... :))

Just seems that Peretz and Olmert are trying to hedge their bets either way. That is not such a wise strategy in the Middle East poker game.

How is he planning on preventing it?