All Guns Are Evil -- when in the hands of Jews

This Reuters article made me sick. Trying to find a negative aspect of a gun range, run by settlers in the Efrat area, the most damning they could come up with was:

James, an Ohio native who did not want his family name published, took the course earlier this month while visiting friends in Israel after a business trip in the West Bank.

"The most shocking part was when they had us shout 'terrorist' before getting into shooting position," he said.

He enjoyed the course and felt it was safe but morally questionable. "It could indoctrinate children with racist beliefs. It was sad to hear young kids express such racism. It makes the likelihood or reaching a peaceful settlement to the (Middle East) crisis seem more difficult." In the group before his, James said, excited children shouted to their parents about being able to "shoot the Arabs."

The parents were stupid for not correcting their kids about who they are shooting at but that has little to do with the shooting range...and the title of the Reuters post was: "Terrorist" targets popular at West Bank gun range

What is so shocking about yelling "terrorist" before shooting at a cardboard cut-out of a soldier? How is that morally questionable?

What would he have preferred they yelled?

I'm sure he would find it even more shocking and racist that the IDF actually trains counter-terror forces in mock Arab villages! (And the IDF also makes its soldiers yell "terrorist" before shooting at a target. The reason is to alert other soldiers why he is shooting, as well as to reinforce to the solider what his target is.)

Here's a picture from one my milluim/reserve duty stints in the IDF. I guess this must be shocking as well. 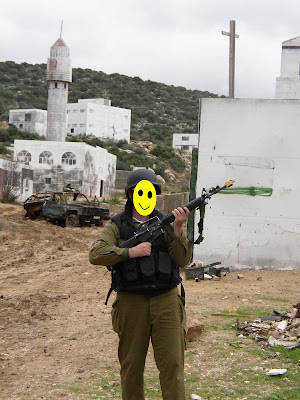 Earn El Al tickets to Israel and other rewards with the HAS Advantage Credit Card!

I guess this must be shocking as well.

Well that yellow is kind of bright.

How come Reuters thinks that the word "Terrorist" could indoctrinate kids to "racist beliefs".

Are they implying that all Terrorist are Arabs (or maybe even all Arabs are Terrorists)?

LOL Freedom Fighter- I think that "militant" is also the word of choice these days. But I like "Humus" the best.

I think the gentleman from Ohio would have preferred that the instructor yelled, "disenchanted youth of Arab descent exercising his right to resist the occupation!"

But seriously, Midwestern mores have no place in the Middle East.

Michael Sedley: How come Reuters thinks that the word "Terrorist" could indoctrinate kids to "racist beliefs".
Are they implying that all Terrorist are Arabs (or maybe even all Arabs are Terrorists)?

Of course they are.

Why else would they have an official policy of never using the word "terrorist" or "terrorism"?

Yeah, I was wondering the exact same thing...

I just took my 3 sons to a shooting course there during our summer trip in Israel, and they did a great job. As an ex infantryman, I admired their professionalism, and I heartily recommend their services.

Much less inflammatory, unless you happen to be a melon lover.

Actually, this was the most offensive part:

"The usual Jew abroad is not like us," he says. "They learn to be doctors and lawyers. There's an impression that they want to earn money and not that they're strong people.

i thinks israel is fucking damn colonialist.Stay at palestinian country and act like their own country.I feel world is blind.How can they keep quiet see palestinian suffer everyday.I wish one day there are new salahudin al ayubi that can free the palestin again.And make israelian feel suffer as same as how palestinian feel nowadays.

Anonymous: Don't hold back. Let us know what you really think.