Yet Another Mashiach Announcement

I remember hearing promises "in the name of Kabbalists" that PM Sharon would be Israel's last Prime Minister before Mashiach comes. Of course, Olmert and Bibi have followed.

Now someone's distributing in Petach Tikva notices that yet again the current Knesset (the 18th) will be the final one before Israel's redemption.

Included in the unsigned notice are the following dire predictions:
Yes, one should believe that Mashich is on his (her?) way, but to make predictions like this are simply wrong. We've had close to 2 thousand years of failed predictions. 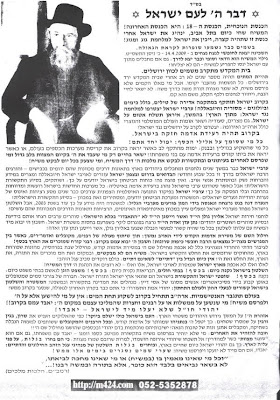 Email ThisBlogThis!Share to TwitterShare to FacebookShare to Pinterest
Labels: mashiach

Wow, what an amazing gallery of over-the-top apocalyptic messages! And some good vintage ones, too! There's one warning of "mega-tsunamis" and skyscrapers sinking into the ocean in the USA, and urging Jews to leave the USA for Israel immediately or face the consequences - from April 2006! They haven't even had the busha to take down their aged dire predictions when the disasters mentioned simply failed to happen...

Yeah, there is one nut who sends me emails all the time from this website - actually, he keeps changing URLs, but still has the same old info (as Shaul mentioned).