Last week I had the privilege of attending a special presentation and demonstration of the IDF Medical Corps for the Foreign Press and bloggers (ok, blogger in the singular).

I was definitely the odd one there -- without a huge, expensive camera and sans-official press credentials. Regardless, I'm extremely grateful to the IDF Spokesman's office and NewMedia desk for inviting me -- and I hope these blogs posts do justice to the interesting demonstrations I saw.

On a personal level, I found the topic fascinating since I'm involved in emergency medicine through Israel's emergency medical organizations Magen David Adom and United Hatzala, as well as being on the "comabt" side through my IDF reserve duty.

I arrived at the IDF Tzrifin base and parked at the wrong entrance, but IDF Spokesperson, Captain Benjamin Rutland was more than helpful in directing me to the "correct" entrance on the other side of the base (a ten minute drive since the base is huge). Though at first we spoke in Hebrew, kudos to the IDF for having native (and helpful) English speakers on staff at the IDF Spokesman.

The first speaker was the IDF Surgeon General, Brig. Gen. Dr. Nachman Ash who discussed the current state of the IDF Medical Corps, its activities, and its cooperation with foreign armies in combat field medicine. 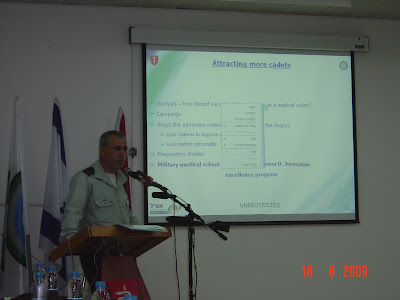 Dr. Ash mentioned how the IDF will start outsourcing some of the routine IDF health care services to public HMO's (Kupot Cholim) who will treat soldiers on bases. I found it interesting that there's currently a shortage of IDF doctors, since the massive influx of olim doctors from the wave of aliya from the Soviet Union had subsided.

In additional to the purely military aspect of combat medicine, the IDF Medical Corps take charge of Israel on a national level, when Israel's is faced with national medical emergencies (and we hope swine-flu doesn't require the IDF's assitance)

The following speaker was the head of the Trauma Branch, Lt. Col Dr. Gill Hirschhorn 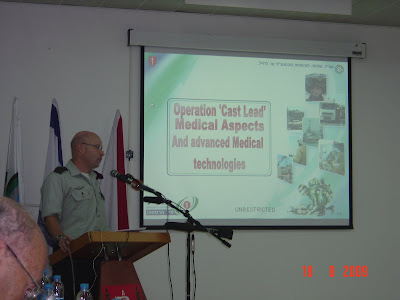 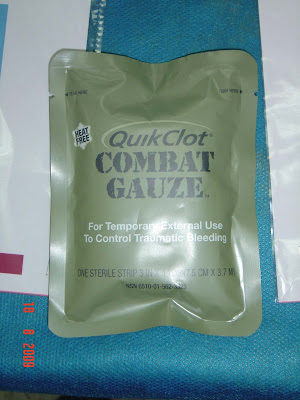 Dr. Gil described the "lessons learned" from the Second Lebanon war, and how they were applied to the Cast Lead Operation/Gaza War this past January.

New medical innovations already proved themselves on the battlefield saving lives, such as the "Quick Clot" Combat Bandage. This new item already battlefield proven by US marines in Iraq and Afghanistan provides significant blood clotting for severe trauma wounds.

Dr. Gil told me before his presentation that this item proved itself, saving lives of IDF soldiers during Cast-Lead.

Another innovation used by the IDF during CastLead is a ruggedized, lightweight, electrically powered Oxygen ventilator. 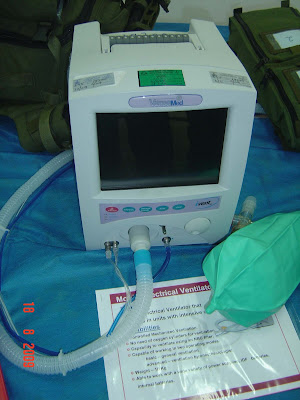 However, the 2 innovations that drew the most interest are those in development right now.

The first is a portable, electrical Oxygen generation device that can produce 100% pure Oxygen at a rate of 10 liters per minute (the amount used for emergency respiratory support) -- without the need for Oxygen canisters/balloons.

If this device ever makes it into production, it will be a revolutionary device, not only on the battlefield for combat medicine support, but for civilian emergency medical providers as well. 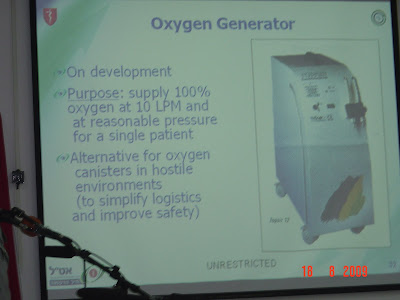 The next innovation seemed like something out of a science fiction movie. 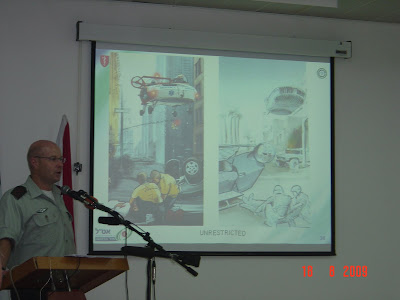 This transporter is already past the planning stages, and is being developed by an Israeli-based company in Yavneh, "Urban Aeronautics." Dubbed, the "X-Hawk", this unmanned, next generation emergency transport vehicle will be able to arrive at a battle scene to evacuate wounded soldiers -- while being remotely piloted from a safer zone, away from the battlefield.

Foxnews reported on the X-hawk a year and a half ago, and the IDF insists that the prototypes are not far away (as close enough as 2010)

Like a similarly sized helicopter, X-Hawk will be able to take off vertically, fly up to 155 miles an hour and as high as 12,000 feet and remain aloft about two hours, Urban Aeronautics says.

But encased fans will replace the exposed rotors that keep helicopters from maneuvering effectively in urban areas or dense natural terrain because they have to stay clear of walls, power lines and mountain ridges. And a patented system of vanes is designed to afford the vehicle greater stability.

Urban Aeronautics says vehicles will be able to sidle right up to a building. (Fox)

The following Urban Aeronautics video gives us an up close and personal example of what we can expect to see.

The IDF is taking this venture very seriously.

We also heard about the "Namer" (the Tiger) which is already on the battlefield. 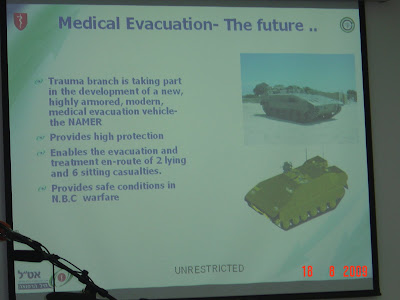 Laid out on the back table were examples of already-in-the-field innovative equipment. 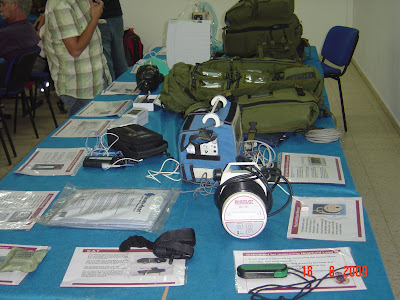 In my next posting on the IDF Comabt Medicine presentation, I'll describe the 2 exercises we saw -- how the IDF prepares its paramedics to save lives, under the pressures of urban combat.

Wow - cool stuff! This is going into HH this week for sure....

WBM: If you think this was cool -- just wait till part 2.