Now there's really no excuse to put off aliya any more. Israel's economy is recovering faster than almost every other Western country affected by the global recession.

Throngs of people wait on line for the grand opening... 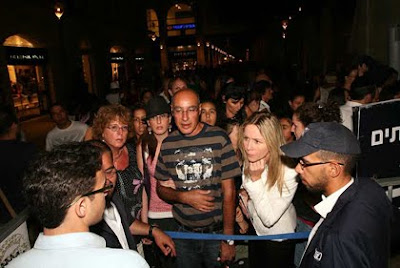 At 8 PM -- the Mezuza was affixed to the GAP store's entrance by CEO Moti Ziser, and the crowd flocked through, for the GAP buying experience... 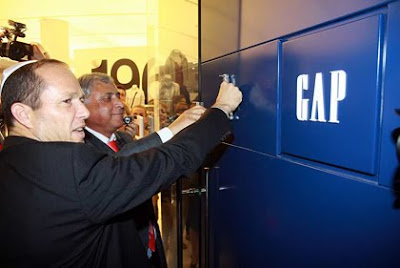 The Gap empire opened its first Israeli branch on Monday, after a three year delay. The store on Jerusalem's high-end Mamila Avenue makes Israel the 17th country in the world to host a Gap branch.

Gap's expansion to Israel is a positive sign for the company, which has been strongly affected by the global economic crisis.

The company is entering an apparel market in Israel already saturated with trendy clothing brands and stands to become even more so when the popular clothing store H&M opens in the spring of 2010. That store will be opening in the Azrieli Center in Tel Aviv, the same location where Gap plans on opening their second store.

Nefesh bNefesh still has room for next week's summer flights...

one can only hope that target isn't far behind.

Nope, not good enough yet.
You guys are still missing Walmart, football, and decent orange juice.

Asimonim. I have $2500 in asimonim and until Israel fixes the telephone system so that I can spend them, forget it.

The asimonim are collectors items. When Israel came out with the new plastic 20shek bill, it added a special red happy birthday wish on about one million of them, the vast majority of which are now hounded away as 'collector's items'.


Target/walmart - I agree, valid reasons to put off for now.

Target/walmart - I agree, valid reasons to put off for now.

Someone please tell me that this is a joke.

Why are they putting on mezuzas on stores when, hopefully, nobody lives in them?

I pray that y'all get a Target. Israel NEEDS Target. I love Target.

There already is an Israel IKEA, and maybe two I think by now.

H and M is supposed to be coming. Target? Not sure it could happen here.

And Ikea? Yeah, I'm running to buy something Swedish right about now.

(And I posted on my blog about how we celebrated the Gap's opening).

What's wrong with Israeli orange juice? The frozen OJ is delicious and the fresh stuff is even better.

I would be happy for a Target. Bazaar Strauss is just not the same.

GAP is only good for jeans, with label "SALE". Other collections are dull and overpriced. If you have H&M or ZARA in you city never look at GAP unless you need classic jeans in "Sale" time.

I love you guys (tzionim - particularly the frum ones) but this obsession with aliyah is going to drive me nuts. We each have our shlichus wherever it is. Not everyone can or should go to eretz yisroel now. Quit it! Abandoning the not-yet-frum Jews here is the real aveira.

And a computer superstore like J&R or B&H. (And they're both owned by Jews who should make Aliyah).

The Ikea in Israel is both Kosher and Shomer Shabbat. How cool is that?!

Menashe: Do other mitzvot drive you nuts as well?

During Bayit Sheini, the majority of the Bavel "frum" community refused to move to Eretz Yisrael as well...and there was even a Beit HaMikdash then!

And by the way: There's awesome OJ here in Israel -- Pomeranz OJ is better than Tropicana.

The "Schot" brand that is available in most supermarkets is delicious orange juice, as well. I have tried Pomerantz, but I think I prefer Schot. Either way, it's the kind of thing I skip until American relatives visit. They need their orange juice.

yup, the golus Jews want golus to continue so they can have target, OJ (of course, the OJ here is better in reality than the crap in the US)the yanks and the mets.

but beinng part of the Jewish people is oh my oh my the most important thing for you. just nnott important enough to give you narish creature comforts. and o course now tha Lipa can do Disney - hey we have made it big time.

Heck, who needs G--d the land our forefathrs dreamt about for 2000 years (anybody read the kina Tziyon halo Tishali by that Tzioyni R' Yehuda HaLevi, how did the reshoim manage to shtup that into the kinnos?) (and we at lease daven very quickly for in Shmoneh Esrai) and that He wants us to live in and has made it pretty obvious for anyone with a brain that NOW is the time.

I wish them the best, but it seems that their choice of location for flagship stores (Mamilla and Azrieli) means that the clothes will be more overpriced than US prices and branded for the rich people.

And,
is bringing more western culture to Israel good for Israel?

I admit that GAP kids has better quality than the other Chinese junk available, but there is a price to that.

For all the people worried about not having, Walmart or Target, in Ginot Shomron, there is a store לי ולך that has everything those stores have.

I like my shampoo, body wash, deotarent, toothpaste, toothbrush, eye drops, face wash, mouth wash meh ok are we getting the point ?

I btw made aliyah 3 years ago and lived in israel almost 7 years now bh although past year in USA but for health issues.

p.s. I want starbucks back.. then we can talk! I hate that ice coffee slurpee junk!

P.P.S. build a house in yehuda shomron.. you can make it as american as you'd like!

Hello?!
The "Walmart, football, and orange juice" comment was a joke, people!
(Geez, you Jews can be so sensitive sometimes. ( ;

The generation in the desert complained life just wasn't as good as in Egypt ... forget mannna, they missed the straw and bricks and meat ...

Our generation's test is Eretz Israel just isn't like America - no Walmart, no Target ...

Now we've got Gap and Ben and Jerry's in Israel, but the way things are going in America, soon there may not be a Walmart or Target left there either. So come on - what are you really waiting for? Book your flight to Israel (where we've even got Ikea ... if that's really what matters to you ...)

Will they open a Baby Gap?

Shops as a reason not to make Aliya?!?!

When I think of the luxuries I gave up to make Aliya- 'Lofty Cohen's 50p and £1 Shop', 'Poundstretchers' and 'Panda Cola'- oy! You Americans don't know you're born!

Yellow Boy: Giving up Cadbury's is much more difficult than giving up Entenmans...

Most chasidic poskim hold there is no chiyuv today to make aliyah. It's a beautiful hanhaga tova provided that is where you belong.

When the whole American Jewry decides to make aliyah we will go with them. In the meantime we've got our work cut out for us here.

Menashe: Tzitzit is only a chiyuv if you wear a 4 cornered garment, but find me a frum chassid who doesnt wear tzitzis?

Its a miracle we have so many people here in the first place.

I agree with the last part of your comment.

But it's you that's messed up if you can speak about psak halacha, divrei Elokim chaim, as anything short of ratzon haelyon. Let me be clearer. There is NO chiyuv according to the overwhelming majority of poskim (virtually every rav outside the DL camp, which as a piece of the whole pie is really quite tiny) to live in EY today. It is a hanhaga tova. A good behavior. But it is the opposite of that when you have a job to do elsewhere, like pikuach nefashos. A doctor goes where he's needed, not where it's comfortable (ie. EY.) Where tzitzis is nogea I have no idea.

Menashe: I'd be very impressed if you could find me ANY gadol that says its not a mitzva to live in EY today and is only a "hanhaga tova".

Please show me a source from anyone that its not a mitzva to live in EY. (All the Rishonim counted it as a mitzva -- either amoung the 613, or a mitzva kolelet)

I comapred it to tzitzit -- because if you dont wear a 4 cornered beged, then you aren't chayav to wear tzitzit. Find me a gadol from today who doesn't wear tzitzit. Its a mitzva. Period.

SuperRaizy -- I know you were kidding :-)

Off the top of my head, Reb Moshe Feinstein comes up. He paskens clearly in Igros Moshe there is absolutely no chiyuv to make aliyah.

Tzitzis is an inappropriate comparison. It's something that klal yisroel and the poskim have been mkabel upon themselves in all places and all times. That makes it a chiyuv all the time one is not in a mivkah/shower.

Once you already live in eretz yisroel than you are limited in the reasons you are permitted to leave [certainly pikuach nefashos is one of them! not to mention a shidduch, limud torah and parnossah] But to pick up and move to E'Y, is again, not a position required by most poskim. It's an individual decision for each person and his Rebbe to determine if that is where he belongs.

I just want to clarify that of course there is a mitzvah of yishuv haaretz. But it is a machloikis harishonim whether it is a mitzvah chiyuvis [meaning that you are oiver if you don't fulfill it] or not. I believe Rambam holds it is not. Obviously optimally we should all live there. But circumstances may dictate otherwise and we're not violating any lavim by not doing so.

Not so fussed about chocolate at all to be honest (unlike some people).

Mazal tov by the way.

There goes the neighborhood. Gap arrival was always the beginning of the downfall of a cool hangout area.

Menashe:
This is NOT an individual lifestyle choice anymore. Am Yisrael cannot allow itself to willingly sustain a Diaspora now that E"Y is as viable a choice as its ever been. Our generation is charged with the task of kibbutz galuyot -- not out of duress, as with the original waves of aliya, but out of a sense of responsibility to the opportunity HKBH has given to THIS dor -- and ONLY this dor! To quote Uri Gordon: This generation will be placed on trial by Jewish history, and there will be no mercy in the judgment.

Menashe - I have been mulling over your point of view and have too much to say for putting in a comment. I have to say that the idea that NOT living in E"Y being OK because of "pikuach nefesh" makes me feel very uncomfortable. The logical continuation of that thought is that I am somehow endangering myself (and my husband and children) by insisting on living here...

I have to do some research and then I hope to blog about this.

2. The challenge of the Galuthi Jew is to take the leap of faith, and come. Fortunately, it looks as if so far we have exceeded the 20 percent mark, alluded to by Rashi re: yissiath Missrayim.

3. We bloggers in Israel, have not abandoned those Jews. Rather we are working to save them from themselves {yourselves}, while at the same time fulfilling our responsibility to take possession of the Land. Hey, that even goes for some of the leftist Zionists, too.

*As Rabbi Teichtel says in Em HaBanim Smeicha {a must read - he answers all of the "Haredi questions" about aliyah}, even the secular Zionists will received some reward for building up the land.