Warning - the following post and pictures are all simulated, yet may be disturbing to some readers...including parents of IDF soldiers.

Viewer Discretion is Advised. (Even JoeSettler was freaked out...)

The IDF Spokespeople took us to the IDF Center for Medical Simulation. In this building, combat medics, paramedics and doctors learn and practice intubations, CPR and live saving techniques on highly sophisticated mannequins -- under combat spressure. These mannequins are generations ahead of "Rescue Annie" which I used for EMT BasicLifeSupport training.

Each mannequin is computer controlled - you can actually feel a pulse in the carotid (neck) artery as well as in the radial and femoral arteries (I personally checked them). The computer can make the pulse speed up, slow down, stop, or be felt in different (but not all) arteries -- which is a simulation of what one can expect when dealing with trauma victims. 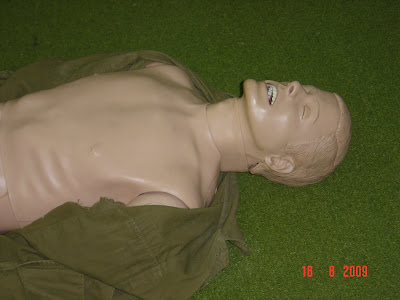 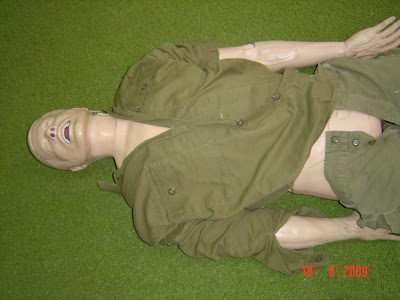 These mannequins can "breathe" and their chests go up and down, simulating lungs inhaling and exhaling -- the computer can even constrict their airways (in their throats) to simulate a blockage. Some of the mannequins can even "speak" -- and the computer operator can make them say different phrases.

Yet these realistic simulations were nothing compared to the next room.

We entered a large room, about 25 feet by 25 feet; the walls were covered with camouflage netting. The floor was covered with about 6-7 mannequins like the ones we saw earlier, but in much worse condition. All were dressed in IDF uniforms, and were scattered around in various situations. One was obviously deceased as it was in 2 halves. 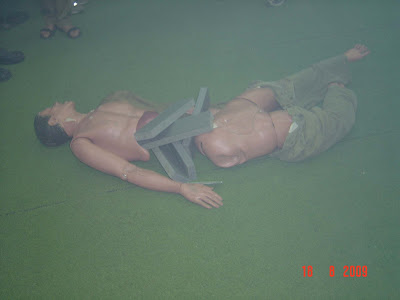 One was missing part of its leg. 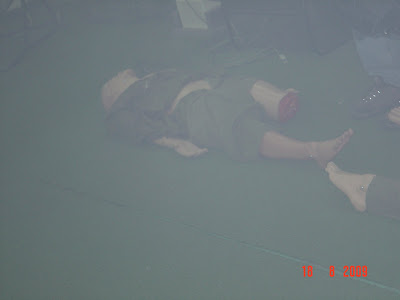 We were asked to move back to the walls of the room for the simulation exercise to begin.

A smoke machine started blowing steam-like smoke into the room, which quickly created a foggy haze.

The lights went out.

And then the sound-track started.

360 degree automatic gunfire, grenades and artillery shells pounded the room, a strobe light flashed around on the ceiling and I instinctively needed to seek cover.

It was that real.

Into this inferno, the IDF medical team was thrown in -- they rushed through the door. not knowing how many or in what condition the "wounded soldiers" would be in. The fog, noise and confusion brought back memories of mass casualty attacks I attended as an EMT, and I watched the medical team try to make sense of the situation, quickly asses the number of wounded, the seriousness of their injuries, and employ methods of life saving techniques.

A quick triage of the first unfortunate soldier mannequin left him declared as dead, as the team split up to evaluate the different "wounded". 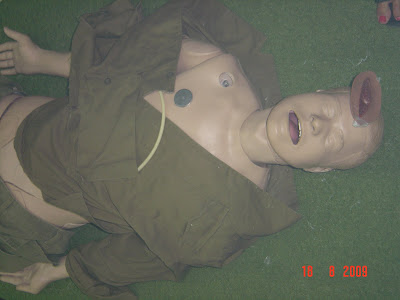 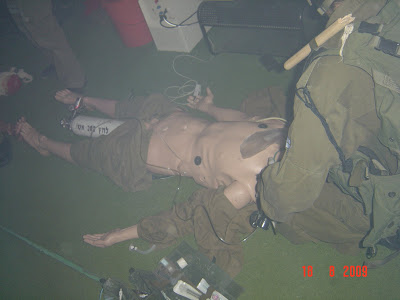 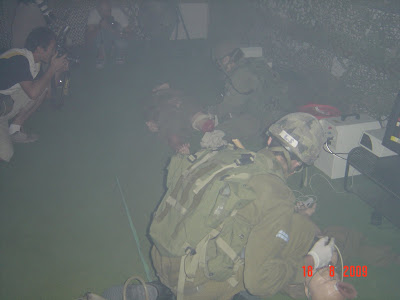 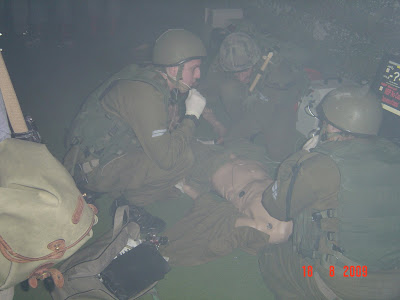 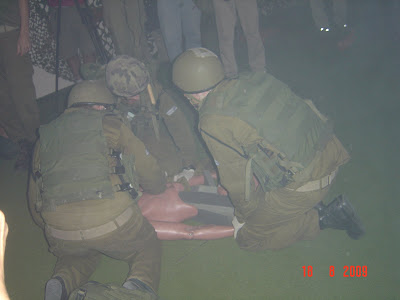 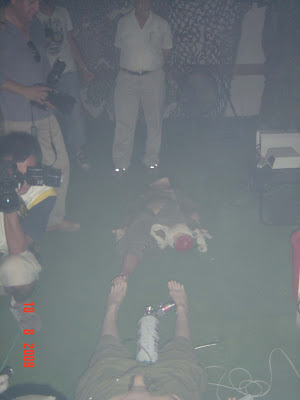 When "working" as an EMT or combat medic, paramedic or doctor, you turn off your feelings completely and go on auto-pilot.

When I've participated in life saving situations, we're taught to turn off all feelings and ignore cries of pain -- as its impossible to work under the intense pressure of saving lives when your feelings get in the way.

Yet as a "spectator" of this exercise I was nearly horrified at the reality of it -- wounded "soldiers," the fog of war, the noise of gunfire and combat, and the cool reports of number of wounded, status of their injuries, and the expected time to evacuation.

The fog dissipated, the medics removed the breathing tubes from the mannequins.

And a jarring, light-hearted rock song was piped through the speaker system.

Preparing for reality -- end of part 2.

I am sorry I could not make it.

Hi -
very interesting article. One point though (serious) - all the dummies seem extremely 'fit' - as in Cast Lead and Lebanon 2 - lots of unfit (overweight) reservists are called up. Doesn't this need to be simulated too - e.g. someone on cholesterol medication (blood thinners) - might need different handling to the 'standard' soldiers.

I kind of had a crush on Annie even though she had no heart. Sorry to see her go.

You definitely go on auto-pilot; as an EMT in the US, I had some calls that, had I thought about it, would have dropped me on my knees.

I've witnessed plenty of "authentic" drills, but nothing like you describe. Just reading about this made it seem so realistic. Our army is amazing. What's really horrifying is the understanding that they need training this extreme.

Women deal with these kinds of trauma victims, just as men do.

Nurses also deal with this. It is not just a man's post.
When in nursing school, half the class posed asw the wounded as the other half did the exercises. It worked well, as the lightly hurt "bus crash victum" would yell out in pain, and one could overlook the quiet critically injured.... Sorry to say we "lost :one as there was no one to dirrect triaging.

I am quite familiar with the simulator at the IDF school of army medicine as an instructor.
This is hands down the best training venue that exists right down to the smoke, the combat noises and even night excercises can be simulated.
Some trainees (doctors and medics alike) end up drenched in sweat. All the medical teams I've ever trained there were very grateful for the opportunity to train before doing out into the "field".
I also had the honor of running an excercise for my American counterparts. They obviously have simulators but they never thought of combining the simulator with the special effects! They were thoroughly impressed with our training regimen.