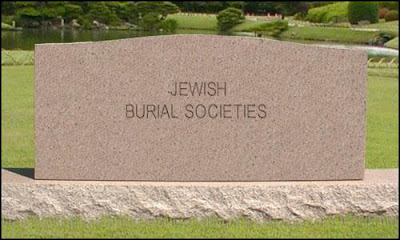 The NYTimes has a depressing article about the mismanagement of graves in Jewish cemeteries/Jewish Burial Societies. One woman who was visiting her husband's grave in a Jewish cometary was distressed to discover that the adjoining plot, which was reserved for her, was already "occupied."

No one could tell her why.

Strange and wrenching discoveries like that have sprung up repeatedly in Jewish communities over the past few decades as families have discovered that the cemetery properties where they expected to be buried among spouses, children and parents are caught in a legal knot that no one can untangle.

The reason: the Jewish burial societies that sold the gravesites no longer have administrators. Founded by the immigrant ancestors of the people caught in this bind, the societies, in effect, have died.

The problem has mainly plagued New York, Boston and other Northeastern cities where Jews arrived at the turn of the last century from Eastern Europe, bringing with them the tradition of dues-paying societies — usually organized by people from the same hometown — that bought and maintained cemetery plots.

Besides reducing burial costs, the societies held periodic meetings that became important social events for networking and keeping up with others from similar roots. Robust for decades, the associations lost members as descendants grew affluent, moved away and left a dwindling, aging few to keep the books and the cemetery lots in order.

Until recently, few religious or government officials took notice. But an accrual of painful scenes has convinced some of the need for intervention.

“There isn’t a week that goes by that we don’t have problems with this,” said Richard Fishman, director of the New York State Division of Cemeteries, charged with regulating burial plots. “A person dies, and they can’t get buried because there is no one left to sign the papers, or the guy in charge is 99 years old and in a nursing home.”

(Rest of it here)

I'd like to think that the problems are better here in Israel, and of course there are mess-ups from time to time.

A worker in the Hadera cemetery forgot his lunch, so his wife sent their son with his lunch to the cemetery.

A dedicated youth, he couldn't find his father in the cemetery's office, so he decided to go looking for his father.

Meanwhile, his father was digging a grave and didn't notice his son looking for him.

"Abba, Abba, where are you?" [Father, Father] the boy said, while walking in between the rows of the graves.

Meanwhile, a funeral procession noticed the boy looking for his father among the graves, and the sight brought everyone to tears.

What could be more tragic than a boy looking for his father among the tombstones in a cemetery?

They almost fainted when a hand popped out of an empty grave along with the voice, "Son, I'm over here, over here!"

I have felt for a long time that Chabad should run the cemeteries. When a community dies off and their children move away or marry out, the profit motive is gone to maintain those cemeteries. The catholics have their arch-diocese to run theirs , even in formerly catholic communities.
Chabad would be the only ones to maintain abandoned Jewish cemetaries

Just thought I should tell you that in Buffalo, NY there is a funeral home called "AMIGONE"

I'm not going to comment on the sad cemetery part of the post - but your "true" story at the end had me laughing and laughing!