Who's Crocheting Your Kippa? 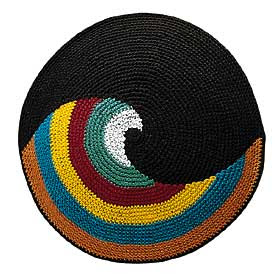 Who's Crocheting Your Kippa?

Is it Chanie or Shaindey?

If you buy one in the US, its probably crocheted by Fatima. The Arab Times reports via Reuters:

DEIR ABU MESHAL, West Bank, Aug 24 (Reuters) - Of all the cottage industries you might expect to find in the Israeli- occupied West Bank, the crocheting of Jewish skullcaps by Palestinian hands seems one of the oddest.

But creating the colourful cap, known in Hebrew as a 'kippah', keeps hundreds of women busy in villages like Deir Abu Meshal, which have been making the religious headgear for their Jewish neighbours for some 40 years. Almost every house in the village of 3,000 west of Ramallah makes the little caps. It's a social event as well as a helpful cash-earner. Women bring their wool and needles to each other's home to crochet and chat.

'We make qors (the Arab name for kippah translates as 'disc') while having a gossip,' said Umm Ali. 'We meet each other and we make money at the same time,' added the mother of three, whose husband is unemployed.

The women make around five caps a day, worth about 12 shekels ($3) each.

Six Palestinian skullcap dealers distribute the wool, needles and the models to women in this village and 10 neighbouring villages.

The finished articles are collected each week and shipped to Israeli retailers. The skullcaps are also exported to the United States.

'The kippah business is what makes my shop busy. Women buy stuff from the kippah money they earn,' said Riyad Ata, whose grocery store serves as a collection point for finished caps from some 100 women.

Observant Jews wear a kippah, which means dome in Hebrew, to cover the head in acknowledgement of the supreme God.

The women of Deir Abu Meshal, known for its traditional dress embroidery, say that to them it's merely a business.

They say they have no qualms about furnishing skullcaps for the people of the occupying power or the Jewish settler, who may be living on Palestinian land.

They say the work is convenient: they don't have to travel.

'Without this knitting business, people here would be very poor,' said Nema Khamis, 50, who passed on her skills to her five daughters and daughter-in-law.

Palestinian weavers used to make the traditional keffiyeh, the chequered Arab headscarf that late leader Yasser Arafat made a national Palestinian symbol. But much of that business has now gone to China, where costs are lower.

The article is a bit silly by stating, " have no qualms about furnishing skullcaps for the people of the occupying power or the Jewish settler, who may be living on Palestinian land," considering as the article also states -- the kippot are mostly for export to the US.

Here in Israel, when not made by a friend, the vast majority of kippot are imported -- mostly from Romania, if my kippa suppliers is being honest.

Thank G-d for Devra. I don't think there is a single Jameel in her family history. ;-)

"Here in Israel, when not made by a friend, the vast majority of kippot are imported -- mostly from Romania, if my kippa suppliers is being honest."

And what makes you think he's honest, when he has such a big incentive to lie?

The article itself seems to say that if anything, more of the kippot are shipped to Israel.

It's wishful thinking on your part to say otherwise.

Shlomo: the travelling kippa salesman from Kiryat Arba claims they are made by Jews. I don't believe him, but we pay him because he needs to money.

The local dealer could say they were made by Jews, but he didn't say that. I'll have his story on Friday (or the next time I see him)

Shlomo: And I know for a fact that the above RutiMizrachi is a highly talented crocheter as well!

I hate to sidestep a compliment; but I can only accept half of this one. RutiMizrachi couldn't crochet her way out of a granny square. The kippah you know and admire came from the talented hands of fellow blogista, Ye'he Sh'mey Raba Mevorach.

Jameel knows VERY well who made that kippah, which his son saw in person at Bnei Akiva Machane. :)

Other things that bug me about the article (undoubtedly a [bad] translation). Most knitted kippot are made of cotton, not wool Maybe the arabic word for 'yarn' and 'wool' are interchangeable. However, I'd call it cotton thread. It's also not 'knitting' although in Hebrew, at least 'lisrog' means both 'to knit' AND 'to crochet'. You differentiate by the number of needles: two or one, respectively.

Gosh am I a pedant or WHAT?

ROTFL about the whole thing. Who cares who made it?

YSRM: Do'h. I KNEW you made the kippa!

Must be the summer heat....

Well, it started this scintillating shmooze. CLEARLY, we all need to get together over waffles.

I recently placed an order for 100 crocheted kippot for my nephew's barmitzvah. The supplier told me they're all made in China.

I'll add my addenda to this subject on your blog. Personally, I don't think men should wear kippot that were knitted by arab women, that include their thoughts, whatever they were, being knitted into the very fabric.

I believe the Torah is very cautious about "thoughts" being intertwined with physical and mental endeavors of the Jew, and wearing that (arabic) kippa could have spiritual effects on the wearer. This is a subject to be explored further.

Can I ask a silly question?
Is it bad if your kippah is made by an Arab/Muslim woman from the territories?
Is it better if it is made by a Christian woman in Eastern Europe?
Do they need to be made by Jews?
The prime minister of Israel states that the way to revive the peace process is to promote economic independence among Arabs in the territories. Wouldn't this be an instance of entrepreneurial activity outside Ramallah?
I'm not being facetious; I'm asking a serious question.
Are you against it on religious grounds?
Is it political?
Is every Arab woman in the territories the "enemy?" Are you worried that the money they earn will go to support terrorism?
I would be very interested in your answer, and I strongly encourage comments from as many of your commentors as possible. I think I would learn a lot.
Thanks.

I don't think we are against it at all. The article was amusing.

To answer Mr. Anonymous, as a Jewish resident of East Jerusalem (but by no means a spokesman for anyone besides myself), I don't see anything wrong with this. The fact that many Israelis would see this as some sort of curiosity frankly saddens me. People who see every Arab as their enemy are the ones who never deal with Arabs in their everyday lives. They are also the ones calling for the erection of concrete walls and electric fences between Jews and Arabs and the division of Jerusalem.

The article also demonstrates in a nutshell how journalists attempt to politicize everything while normal people, Jews and Arabs, generally try to stay away from politics in their everyday lives. The reality of Jewish-Arab relations is quaint and boring. That's why the media, pundits and various propagandists manufacture an artificial reality which portrays life in Israel, and Judea and Samaria in particular, as some sort of endless bloodbath fueled by hatred and fanaticism.

It's understandable that the fact that the Arab women who are mentioned in the article are not consumed by hatred for Jews and have no problem sewing kippas is an oddity to a foreigner who has formed his views of Israel from watching CNN (or in this case Al Jazeera). What's completely absurd is that this sort of ignorance is also widespread among Israelis.

I don't see why this surprises anyone. We exploit cheap Arab labour for all sorts of other tedious manual tasks - construction, agriculture, cleaning, shlepping etc. - why not kippa making?

And if the Palestinians suddenly locked out for whatever reason or if other foreigners will do the work cheaper we'll exploit them instead. We no longer pick our own fruit, look after our elderly, build our own homes, or make our own flags (the Chinese do that for us) yet we have thousands of unemployed Israelis. Go figure.

Its called Outsourcing. Everyone does it.

Many Arab women are actually of Jewish descent so half-consolation.

When I ran out of knitted kipas, I started wearing a leather 'kipa Amerikai' for no ideological statement other than taking advantage of a massive collection not in use from family overseas. Where are those made? I'm afraid to ask.