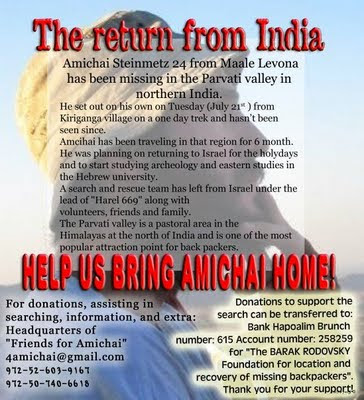 Like the thousands of Israelis who tour the world after their military service, Amichai, who served in a volunteer elite unit in the IDF, went to tour in India. My own brother-in-law is off in China somewhere, having completed his IDF service as well.

"Amichai Steinmetz, 24, of Ma'aleh Halevona, set out from the village of Kiriganga on a day trip July 22 and hasn't been seen since.

"He went with a friend and the friend went one way and he went the other," Amichai's grandfather Sol Steinmetz, a resident of New Rochelle, N.Y., said. "He only took with him his tefilin and a few things and that was five days ago. He had a cell phone."

Concerns over the whereabouts of Steinmetz grew after he failed to return to the village or contact his family on Friday, as he has done regularly every week since he left Israel about six months ago.

The Israeli consulate, the Chabad House in the nearby town of Manali and the Harel Insurance group, an Israeli insurance company specializing in search-and-rescue abroad, are currently coordinating efforts with local authorities to find him.

Chabad.org reported that rescuers in recent days have benefited from a respite in the torrential rains typical of northern India during the monsoon season. 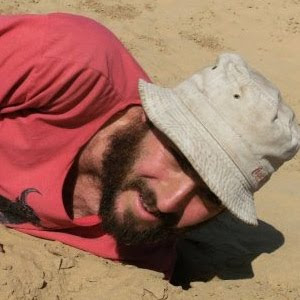 How can you help?

Unfortunately, the money from the insurance company to pay for the search effort has been exhausted. Amichai's family is turning to volunteers in the India area to help with the search, and for people to help contribute to fund the search.

Information for donations is on the above flyer (they really need the money.)

Do you know someone in India now who would be able to help the search effort?

There's a phone number on the above flier which you can use to contact the Steinmetz family.

Add him in your thoughts and prayers: Amichai ben Devorah

On behalf of Amichai's family, thank you.

As a Sar-el volunteer I got to know Amichai's sister Orit very well. She is a wonderful person who speaks of her brother often with joy pride and admiration. Our prayers are with the entire family for Amichai's safe and quick return.

Where in the Hell is he? Where is he?