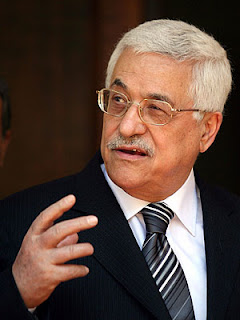 Lots of colorful speakers at the Fatah Conference in Bethlehem today.

Palestinian Authority President (and US mandated peace partner) Mahmoud Abbas had the following to say:

"Although peace is our choice, we reserve the right to resistance, legitimate under international law," he said in a lengthy oration during the opening session of the conference. The term resistance is often used to encompass both violent and nonviolent means of struggle.

He said the Palestinian side is committed to the US-backed Road Map peace plan, but the Israeli side failed to uphold its obligation under the document. (Ma'an Palestinian News Agency) 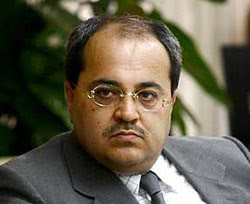 Israel's Palestinian Member of Knesset, Dr. Ahmed Tibi joined the conference as well. His statements brought down the house with tremendous applause:

He called for peace based on a two-state solution, "clean of settlers and settlements."

Tibi turned to the settlers, entreating them to "leave Palestinian lands. Leave all of us alone. Get out!" These statements were met with great applause from the crowd. (YNET

Fatah will never abandon the option of armed struggle. "Resistance was and is a tactical and strategic option of the struggle... part of Fatah's policy" which Israel must acknowledge. (JPOST)

Why the Jerusalem Post lists Zakaria Zubeidi as a "former terrorist" is beyond me.

Former terrorist Zakaria Zubeidi, a senior member of the Al Aksa Martyrs' Brigades who was released from prison in return for a pledge not to engage in terror activities, said Israel has no desire for peace and that the Palestinians must ready themselves for the possibility that "it is war that Israel wants, and not peace." (JPOST)

Thankfully, at least one of Israel's government minister's was awake. Government Information Minister and MK Yuli Edelstein realized that Fatah and the PA haven't changed at all.

Information and Diaspora Minister Yuli Edelstein (Likud) on Tuesday referred to the Fatah congress being held in Bethlehem as "a declaration of war."

"We must not act as if we haven't heard," he told Ynet. "We must emerge from the circle of illusions that these are moderates who want peace. They explicitly say that they support continuing the armed struggle."

"Are these the moderate leaders the world wants us to hold negotiations with?" he asked. "My feeling is that we are not interested in listening to the voices calling for an armed struggle, for the right of return and for the establishment of a capital of their own in Jerusalem.

"We are pretending not to hear the clear trend demonstrated by Abu Mazen (Abbas) and his people to adapt themselves to Hamas," the information minister said.
"This is Fatah we are talking about, those who the international community is allegedly pushing us to negotiate with. If anyone should talk about settlements endangering peace, the most violent and extreme settlement is the Palestinian state, which will be established and run by the 'moderate' speaking today at the Fatah conference.(YNET)

Why dose it take Diaspora Minister Yuli Edelstein to say something?? Where is Netanyahu????

A google search on "legitimate resistance international law" yields very interesting results. One might think that, with all of the civil struggles around the world, there would be number of groups that claim that there is some legal backing to civil "resistance." However, all of the links in the first to pages are to articles on behalf of the Palestinian cause only.
I would like to see Abbas write a treatise on the international law sources that support the Palestinian "resistance."
I won't hold my breath.