Srugim Billboard Ads to be placed in Geniza

Srugim billboards are plastered all over the country (Bnei Brak, Tel-Aviv, Jerusalem, Kiryat Ono, etc.) and they have raised the ire of some. If you look closely, the background image of the show's stars is composed of the writing of a Sefer Torah. Some Srugim aficionados have even gone through the entire billboard ad, and discovered that some ads also includes G-d's name in the text. 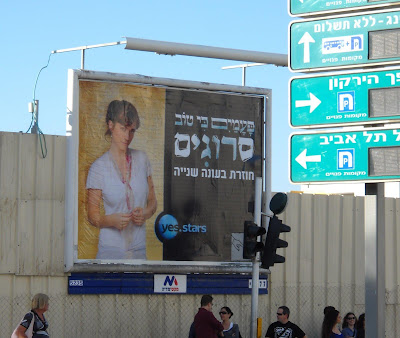 Rabbis and Askanim decried the billboards, and demanded that the YES Satellite Broadcasting company (which produces Srugim) remove the billboards immediately. They even raised the issue with the Chief Sephardic Rabbi, R' Shlomo Amar.

Not wanting to offend religious citizens (potential viewers), or damage the Srugim name, YES announced they would remove the billboards with the background Torah Images. Immediately thereafter, the "Central Organization for the Geniza of Holy Texts" voiced their concern that the removed billboards would simply be "thrown away."

The Yated Neeman newspaper reported today that YES announced that they would arrange for a proper burial of all the removed billboards in accordance with the customs of geniza, and they sincerely apologized for the mishap.

No wonder Srugim's so successful.

If you didn't personally know about religious Judaism, you would swear this was being made up.
Hat-tip: Laizy, YNET, Yated Neeman.
Photo Credit: MyRightWord

PS: This was a better ad...click for better resolution.
(Updated and translated at Lurker's request)

Whoever created the billboard should have known it would have caused a fuss - because of the picture of the woman/girl. A more cleaver ad would probably still be up for all to see.

Thanks you for the link to the episode. (the commercials were hysterical) Seems that the subject-matter is praiseworthy, but nevertheless a HOT (excitable) topic. can see how it would help some, but also offend some.

Just a question. Does it include 'Hashem' in any of the dialogue, i.e., as author of the "Jewish way of living"?

Centuries from now, when our descendants stumble on the gniza, they will really be stumped....

Luckily we have been able to find copies of the show viewable outside of Israel. My wife and I are officially hooked.

my husband's been using the "leatherdos" slang for years. And it's true, it's useful for nearly everything.