In an Arab village close to the Lebanon border, goats and a dog occupied the local bus station where they demanded entrance to the Egged buses.

Egged now mulls the establishment of so called "inter-creative bus lines" based on an ancient concept taken from the book of Genesis/Bereisheet. 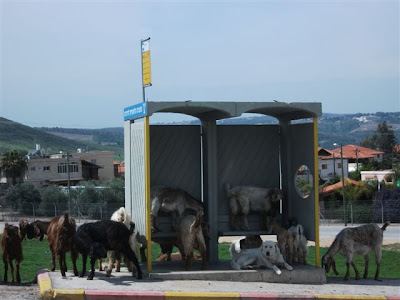 Photo Credit: Leah Rabinsky
This has been an April First Production...

where do terrorists sit? You can't expect the animals to sit with THAT lot.

I was expecting to hear Egged offer a very special bus service to Hamas... with partitioned seating for men and women! ;-)

"the middle part will be for all other Israeli girls (women)"

Just to make the joke clearer.

Careful, PETA will complain that Israel is using animals as shields against bus bombs.