Regardless, someone took one of their ads, and photo-shopped it "Let's see who can stop it" and placed the photo of a Subaru driven by a Jew, which was stoned in a Pallywood production -- by Arabs. In a perfectly time photo-op, the driver ended up hitting some of the Arabs throwing rocks at his car. (Story here) 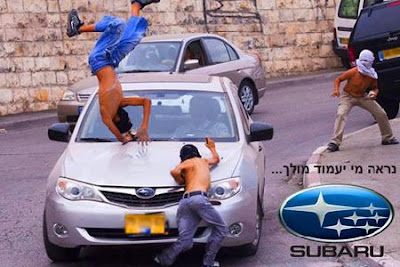 The story here is from the JPost: that the Palestinian Authority complained to Subaru and made them issue a formal statement.

Japan Auto, carmaker Subaru’s importer in Israel, says it has no idea who is behind the creation of an advertisement attributed to it which uses a picture of two Palestinian children being hit by a car driven by a prominent right-wing activist, and which has been distributed to media by the Palestinian Authority.

The advertisement shows a picture of an October 2010 incident in which east Jerusalem resident and City of David Foundation head David Be’eri drove into two children with his Subaru vehicle in the neighborhood of Silwan after they hurled rocks at him. (Be’eri says he hit them accidentally.)

A Subaru logo sits in the bottom right-hand corner of the ad, accompanied by the sentence, “Let’s see who will stand in your way.”

A spokeswoman for Japan Auto said on Thursday that the company had nothing to do with the advertisement, saying, “We strongly condemn these elements that are trying to harm the good name of the company.”

She added that the company did not plan to take any action over the advertisement, as it has no idea where it originated from.

The advertisement, which does not appear to have been published in any mainstream media outlets, was sent to media this week by the PA Government Media Center, which called on Subaru to “take all necessary steps to stop the circulation of this despicable and disgraceful ad and condemn it.”

However, the PA, although not revealing where it had obtained the advertisement, also acknowledged that it is not clear whether the ad is genuine or whether someone not connected to the company has made use of the Subaru logo without its approval. (JPost)

The PA, which runs one of the most antisemitic, incitement and hate filled TV station on the planet, runs to Subaru to issue a condemnation?