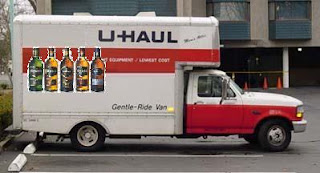 In an (almost?) unprecedented incident, the non-Jewish "chametz" owner of the Jerusalem Neighborhood Ramat Shlomo decided hours before Pesach to actualize his legal right, and take possession of all the chametz he purchased. Actually, he didn't even purchase it -- it was given to him as a present...

Kikar Shabbat reports that days before Pesach, Rabbi Simcha Rabinowitz from the "Mishkenot Yaakov" synagogue community announced that he was setting aside a special room in the synagogue for everyone to put their chametz. [Normally, Jews sell their chametz/unleavened products for the period of Passover, and buy it back after the holiday is over...yet this story takes a different twist.]

The rabbi explained that it is better not to sell actual "chametz" to a non-Jew, but to give it to them as a present. If the non-Jew doesn't actualize ownership over Passover, then after Pesach, one can re-take ownership, and this is considered "much better" (mehadrin) than selling chametz to a non-Jew.

Dozens of people decided to use this "better" option and transferred tens of thousands of dollars worth of whiskey and leavened bread products to the room allocated by the Rabbi...all assuming they would retake ownership of it, after Pesach.

However, much to their dismay, hours before the holiday the person showed up and happily claimed his present in front of all. He cleared out the room of the whiskey and alcoholic drinks, as well as expensive baby carriages (worth thousands of NIS) that the owners didn't clean for Passover -- and had placed in the room...

The owner disappeared, leaving an empty room in the "Mishkenot Yaakov" synagogue. (source)

Hope you're enjoying your Pesach...

Something to think about before selling the land to a gentile in order to use its produce during the shmitta year eh?

Reform Baal Teshuvah: No one "gives" away land during shmitta...that's what this Rav did.

Though I guess it was the same sort of thing in the Disengagement. We gave away all of Gaza, and it did us a heck of a lot of good.

I don't really understand what this Rav did. Where was the Kinyan? Oh . . . that would have been when the goy picked up his chametz.

My understanding of the heter for shmitta was that the land gets sold, similarly to a Chametz Sale. I mean there's risk. My shul's caretaker could show up here right now and eat the chametz I have stored (for him, of course) in the cabinet over the sink.

I never understood the disengagement. I opposed it at the time, and it was very frustrating watching everything I thought would happen, happen.

Don't conflate a legal fiction made fact with plain and simple tipshut, which is what the Disengagement was.

RBT: We dont know what the actual kinyan was...but I doubt he fully explained it to the Non Jew (whatever he was trying to accomplish). To say that "if the Non Jew doesn't accept ownership of the free chametz before pesach, then after pesach you can take it back..."

The heter mechira is selling only the top soil, not the whole land...and it is also (if I recall correctly), time based for a year...not open ended like a chametz sale.

He was only entitled to the chametz in the stroller, not the whole stroller!

I love these article at kikarshabbat that don't bother to get the whole story or comments from all sides, just like the secular tabloids. Would it be hard to track down the rabbi for comment? Do we know if there is an agreement between the rabbi and the goy to buy back the chametz after pesach? Frankly, I would love to be able to get the goy to pick up my chametz. I don't keep chametz gamur over pesach, but I think that those who do are better off if the goy does physically keep it for the holiday.


Besides that, the thing about the stroller is ridiculous.

Ridiculous: He now has to pay for the chametz in full. If he does, no one loses anything. If he doesn't, it's simply theft.

(That's also why heter mechira has nothing to do with this. You can't carry off land.)

Besides that, what's the problem with cleaning a stroller??

Nachum: The non-Jew didn't buy the chametz -- the Rav decided that it was much more mehdarin to give the chametz away, so therefore the non-Jew doesn't have to pay anything.

It was simply a GIFT!

Giving away the whiskey etc. makes sense to me.

The strollers, on the other hand, should gave been locked up elsewhere or actually cleaned - who doesn't need their strollers over yomtov? In a standard chometz "sale" the keilim and furniture themselves aren't even included, (just any chometz stuck to them?) so they shouldn't have been included in this "gift" either.