Information on the murders of the Fogel family of Itamar has been released.

The murderers are allegedly Amjad Awad (19) and 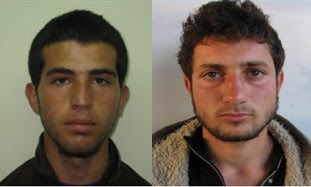 Hakim Awad (17) from the town of Awarta next to Itamar. They're from the same Hamula (meaning they're relatives but not brothers.

(Apparently the picture I saw a few days ago was the correct one).

The murder was premeditated. The two had planned for days on how to get into Itamar and murder anyone there they could.

They had tried to obtain a gun ahead of time but were unable to. Instead they went in with knives and stole a gun from another house (the Chai family).

They then entered the Fogel's house and first murdered the children.

The parents then heard them and tried to stop them, and which point Udi and Ruth were murdered. They they also stole Udi's rifle.

The two Palestinian terrorists then returned to their village. One cousin helped them destroy the clothing. An uncle brought the weapons to Ramallah to be sold.

Security forces captured them due to the DNA left behind from fighting with the parents.

During the search of Awarta many other weapons were found.

Conclusions? It appears that plenty of people in this town knew who did it. Relatives who helped. Those who helped try to sell the weapons. Others who hid weapons.

If ever there was a town that deserved to be laid waste - this would be it.


Here are photos of Leftist visiting the town of Awarta yesterday (including to the house of one of the murderers), apparently to show their support for the town. 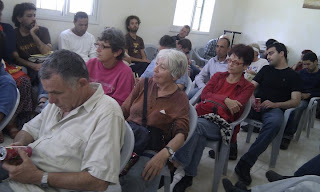 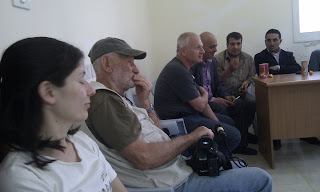 Amy chance of the death penalty being sought?

No... Israel's Stupid Jews don't believe in executing savages. I believe the death penalty would be justified here.

And this entire village should be deported as punishment to Lebanon but we know that Israel's leaders are terrified of bad press so those who shielded the Fogel family murderers will be get off scot-free.

Welcome to the New Middle East!

@Muqata I sent you a message on twitter, Read it. -@KolYisrael

Hands down, there needs to be a death penalty in Israel for acts of terrorism, such as exists in the US. Believe me the face of the conflict would look VERY different. We would no longer be subject to ridiculous Hamas demands to release mass-murderers who should've been electrocuted years ago for their crimes.

I was thinking we should just carpet bomb the village.

Flatten that town and drive them out.

The sooner the West Bank is cleared of settlers, the better for Judaism. YESHA is a mental illness and you need emergency psychiatric attention. There is no way Moshiach can come when you are filled with such hatred.