6:13 PM Channel 10 Reports that there is currently an IDF multi-pronged retaliation attack on Gaza, including from IDF Gunboats, IAF Helicopters, IDF tanks and artillery. No (known) IDF ground forces have entered Gaza.

4:15 PM Gazan terrorists hit a school bus in the Negev with an anti-tank rocket. The driver and a 16 year old were injured. The injured teen is in critical condition.

Update: 4:54 PM As part of this terror attack, over 16 Gaza-fired Rockets have landed in the Israeli areas surrounding Gaza.

Update: 4:58 PM Channel 2 reports the IDF is shooting back, firing artillery into Gaza. Reports from Gaza of dead and wounded in IDF strike.

Update 5:03 PM IDF has closed road 232 (inside Israel) to all civilian traffic due to ongoing rocket attacks from Gaza. 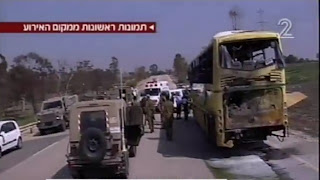 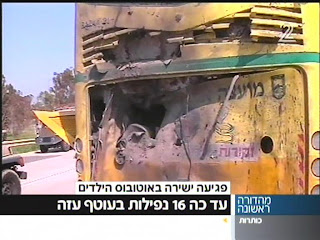 Jameel adds: Is this inconceivable that Palestinian terrorists shoot anti-tank rockets at school buses? Where is Israeli MK Hanin Zuabi to condemn this terror act, and demand the terrorists are given the death penalty?

JPost adds: An anti-tank missile landed near a school bus outside Kibbutz Saad in the Negev on Thursday, injuring two people.

The bus driver was seriously injured, and one 13-year-old passenger was critically injured. They were the only people on the bus.

Magen David Adom paramedics are attempting to revive a 13-year-old boy who was on the bus.

Additional mortars were fired at the area. Residents have been instructed to stay inside buildings.

Its a disgrace Israel's leaders give immunity to terrorist leaders who order the murder of Jewish children.

If it was their kids, you can't bet they wouldn't be making excuses about Gaza!