Limits to the Revolution

We haven't written much about the Egyptian revolution. But it doesn't look like its going so smoothly right now for the citizens who want freedom.
Egyptian blogger Maikel Nabil Sanad, a pro-Israel(!) blogger has been arrested and sentenced to 3 years in jail. 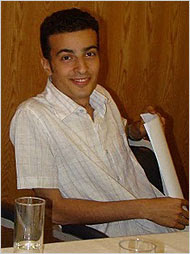 Maikel criticized the Egyptian military, claiming it was continuing Mubarak's legacy of non-Democratic rule. He also claimed that the military tortured protesters.

(If you're wondering how an Egyptian blogger might be so pro-Israel as he is, it's probably because he's a Coptic Christian).

What internal conflict this must pose for the left.
Do they demand freedom for a blogger who is more proIsrael than they?

Nope. A good leftist is always against Israel and against the "occupation."

As Gideon Levy helpfully reminded us the other day, Israel's problem is not one of hasbara but of the need to follow the right policies.

Its good advice. I wonder if he'll offer it to Egypt.

The sandmonkey fool can get away with it because he's muzlim.