I fell off my chair laughing when I read this one.

On a Channel 2 report on Netanyahu's alleged double-billing scandal, Ofer Shelah, decided to share a story about Netanyahu with the viewers to give them a proper perspective on the man they were reporting on.

To give you some background, Netanyahu is probably one of the most careful politicians around when it comes to finances and scandals (at least since he found himself forced to make that announcement many years ago about someone trying to blackmail him).

He knows the media and the Left are out to get him so he tends to be extremely careful not to get close to any wrongdoings.

The current investigation against Netanyahu is now pointing towards 2 incidents of double-billing on trips abroad (think Ehud Olmert).

Channel 10 has been leading the charge.

So far Netanyahu has admitted that one trip was double-billed!!!

That's right. He admits it.

Now before everyone on the Left gets all excited, there is second part to that story. Netanyahu also has the canceled receipts that show that he immediately returned the money when he saw it was double-billed. Channel 10 will be facing a libel case soon.

Copy of Cancelled Invoice that Channel 10 used as proof of Netanyahu's "double billing: 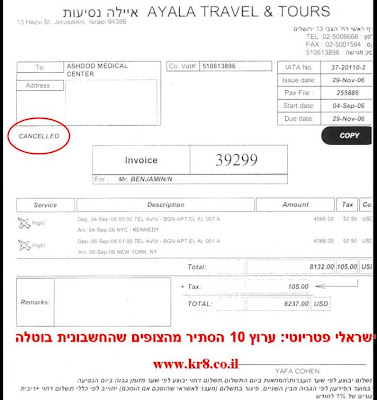 But back to Ofer Shelach.

Ofer Shelach decided to share a story with the viewers to prove that Bibi can't help himself but always lie, even about inconsequential things.

On the YouTube interview, Netanyahu answered a question about what book he was reading. Bibi said he was reading a book called "Securing the State" by some British agent.

Ofer Shelach knew that Netanyahu must be lying and decided to do an internet search for the book. Ofer Shelach could not find that book or anything like it with a similar name.

Ofer Shelach led the viewers of Channel 2 to believe that Netanyahu may even be lying about what book he was reading.

As it turns out, Netanyahu took some reporters with him on a helicopter ride a few weeks ago to see the fence down south. One reporter was Herb Keinon from the Jerusalem Post who happened to notice which book Netanyahu was reading.

Could it be that there are those in the Israeli media who are simply out to get Netanyahu?


A few weeks ago I wrote a post called "Only an idiot would steal an iPad".

3 investigative journalists for Ynet decided to test out their iPads to see if they could duplicate the events. They couldn't. Their locations were off by as far as a block. They concluded that Yaki was lying and made up the story.

Like Netanyahu, Yaki also doesn't like being called a liar. His response was that his little girl has more technology sense then these 3 investigative journalist put together.

On his blog he showed how using MotionX software with the iPad it is possible to achieve a very accurate location reading.

Could it be that Israeli reporters not being purposefully malicious against Netanyahu, but rather are simply completely inept?

Nu, OK, people are out to get Bibi, so what's new. It's a tradition in Israel going back to 1977 started by (which of your readers knows the answer, and connection to Rishon Tours?). However, Bibi has been caught telling some whoppers. Though I don't know him so personally, I'd say he is more likely to lie about what he ate for dinner (or read) than about being involved in financial corruption. I will also tell you that I had a chance meeting with a veteran Likud activist when Olmert was indicted for Rishon Tours. He basically told me that, while he was happy that Olmert was disgraced (for political reasons) he thought that Likud MKs should be very careful about what they say, since it was apparently a very well-known and well-used practice to "double bill" in the good ol' Likud days.

Its an open secret Israel's leftist media has hated Netanyahu and they've done everything they can to get rid of him by fair means and foul.

If Channel 10 gets bankrupted by that libel lawsuit, it may well put a damper on other such attacks.

But because he is not one of them, expect the attacks from the Israeli Fourth Estate elite to continue on the Prime Minister until he has left office.

As someone who likes doing research, and is a librarian, I can imagine that a non-native English speaker would have a problem finding a book title. I don't think he necessarily tried very hard though.

In my humble opinion most Israeli reporters are both dishonest and inept. And the Hebrew papers are dominated by leftists too. A lethal combination.

Safranit: Using the PhD-mandatory, complex web search tool, "google" and entering in the text, "Securing the State" -- results with Amazon as the top link.

The link of course on Amazon is for the BOOK! There are thousands of following links after it, referring to THE BOOK.

There's an AD on the side of google for the same book!

If the reporter was so English-Challenged and Internet-Challenged that they can't use google and basic English skills of typing a book name into google, then I don't understand how the reporter has the mental facilities to be a reporter...

seems to me these leftists are sinking fast. let's just not stoop to anything and let them throw themselves in their own holes....