So what is with Peres and the Left? Why do they hate the Golan so much that they find every opportunity to announce they want to give up to the Golan to whatever dictatorial regime currently controls Syria. 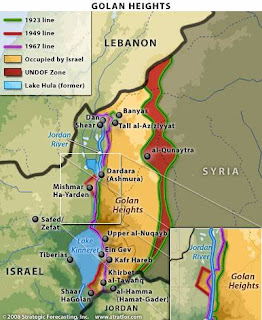 I suppose we should be glad that Peres states that when Israel gives up the Golan, he won't accept an Iranian presence on it. (And how will Peres enforce that?)

I was listening to a radio interview with Prof. Moredechai Keidar of the Middle East department at Bar Ilan University the other week.

Keidar probably became best known to the general public when, in an al-Jazeera interview (in Arabic) Keidar declared that Jerusalem is Jewish and only belongs to the Jews and will remain so forever. The al-Jazeera interviewer tried to claim that Jerusalem is mentioned in the Koran. As you can see in the video, the interviewer quickly realizes that it isn't as Keidar points out and tries to change the subject.
I only heard part of the discussion on the radio the other day, but Keidar was saying that Syria is actually made up of 5 primary ethnic groups/tribes, and if I understood him correctly, at some point Syria is likely to break apart into 5 different states - if the revolution against Assad takes hold.

So I ask Mr. Peres. Didn't you learn the lesson from Egypt?

We do not know if in one year from now there will still be a working peace treaty with Egypt. We do not know yet to what extent the Egyptians will abrogate it while Israel sits quietly hoping to not give Egypt an excuse to abrogate it even faster and farther.

Meanwhile, you continue to blindly propose we hand over a strategic property (that we won fair and square in a defensive war) to (a) a dictator, (b) a dictator who may possibly soon fall, (c) a country on the verge of splitting into multiple countries none of whom may particularly feel obligated to uphold a treaty of "another" country and (d) a country that may soon turn into another Islamic state (Syria is currently not an "Islamic" state like Iran, or what Turkey may eventually turn into).

And what does Israel get out of throwing away the Golan?

A chance to eat Hummus in Damascus?

I don't see Syria leaving the warm bear hug and shared border of Iran, certainly not to an unreliable ally like Obama. Furthermore, our quietest border has been with Syria because we strategically hold the Golan.

Why would we want to jeopardize something that's proven to provide far more stability than any peace treaty?

Because Assad is our enemy and wants to attack us through Hezbollah or is developing nuclear weapons for Iran? We've proven on multiple occasions that Israel can operate within Syria to defuse potentially dangerous developments.

So Mr. Peres, why don't you remind the Israeli people that when you talk about giving away the Golan to an enemy, that enemy states he will still remain our enemy, just possibly a less belligerent one (or alternative interpretation, give away the Golan to someone who refuses to guarantee any peace in return).

"If they say you can have the entire Golan back, we will have a peace treaty. But they [Israel] cannot expect me to give them the peace they expect."

So there you have it. Peres is pushing for something that Assad has no intention of providing.

In the long run, if Assad decides he wants to modernize his economy, improve the standard of living of his people and stop being a pariah state he can do all that without the Golan, because in the long term, it is in his interest to do so. And he know exactly where to go to do that - to Israel and the US - both of whom will happily help him achieve that goal.

But Israel doesn't need to pay off Assad or Syria with Golan coin for them to decide to improve their lives and become good citizens of the world.

That decision is in their hands, and not connected to a strategic piece of property that has guaranteed a quiet border for 38 years.

Mr. Peres your disconnect from the reality around us was once beneficial to the fledgling Jewish state. But now? Now it just harms us.

I personally would have Israel cede that senile old fool to Syria.

Let them have Peres and Israel keeps the Golan!

I agree with Peres that Israel should have a peace treaty as its ultimate goal vis-a-vis Syria, even if that means giving up the Golan. I disagree with his view that the Assad regime is a suitable peace partner.

Suppose Israel did make peace with Assad, and that he faithfully honored the agreement, took Syria out of the Iranian orbit, and stopped giving material support for terrorism. Even if all those things happened, the peace would still be dependent on Assad's regime staying in power.

Israel should only make peace with Syria in the (unlikely) event that Syria evolves into a multiparty, rotational democracy--the sort of government that can be trusted to honor its treaty commitments regardless of which group is in power at the moment.