I don't recall so many catastrophe's for Israel's left wing, as this week.

Mondoweiss has, by my count, no fewer than 13 posts about Goldstone in just the past two days. It is almost as if the anti-Israel crowd is going the first three of the five stages of the Kübler-Ross model of grief:

Denial: Goldstone didn't really retract, and Israel still targets civilians in what must be the most ineffective attempt at ethnic cleansing in history.

Bargaining: “The judge only comments on one small part of the report, which I take as an implication that the rest of the report stays intact and he is still in support of that.”

All we have left is depression and acceptance. Depression will come, but it won't be blogged, as anger is their driving emotion. Acceptance cannot come, because as long as Israel exists in any form, these hateful lunatics - who happily publish the most ridiculous rumors of Israel arming Gaddafi - will never accept any possible defense for its existence.

The second Naqba was the murder of Israeli Peace activist and actor Juliano Mer-Khamis in PA controlled Jenin. By Palestinians.

The third and perhaps most painful Naqba, is the loss of the NIF's primary funding from their Sugar Daddy, the Ford Foundation.

Losing so much funding will definitely have a dampening effect on the ability of NIF-funded organizations to fuel lies to Goldstone-like reports, and will take a bite out of the local "progressive Zionist" anti-Israel campaigns.

A side Naqba is the start of the trial against Hamas Terrorist, Dirar Abu Sisi, who the left has been claiming is an innocent engineer.

Dirar Abu Sisi gave Israeli intelligence 'valuable information' that led to the attack on arms smugglers in Port Sudan, Sudan, a source told Kuwait newspaper Al Jarida reported Thursday. According to the source, Abu Sisi passed along the sensitive information to Israel during his remand since he was abducted by a train in Ukraine last month.

The source also told Al Jarida that Israel also received valuable information on smuggling routes and cells operating from Sudan, through Egypt, and to Gaza, from a number of southern Sudanese refugees who have migrated to Israel. (JPost)

It's all narrative anyway. One person's Naqba is another's sigh of relief.

A balanced article managed to slip through the sharp claws of Haaretz's editorial staff, and I'm recommending it for all: Israel's left needs to wise up to Middle East reality: How would the left have reacted had Juliano Mer-Khamis been murdered by Jews? 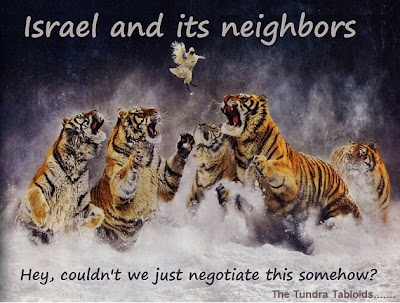