Can you offer an explanation?

Jameel and I aren't into conspiracy theories, so when something unusual like this comes along, we end up scratching our heads looking for explanations that make sense without the conspiracy. But we gave up, and want to hear what you think.

On August 4th 2005, Jewish Terrorist Eden Natan-Zada got on a bus, traveled to the Israeli-Arab town of Shfar'am and opened fire. Natan-Zada was captured by police and handcuffed inside the bus. Arab rioters then scared off the police, stormed the bus, and proceeded to lynch the already captured and immobilized Natan-Zada.

Here is where the story gets weird.

Ha'aretz is reporting that the Natan-Zada defense lawyer uncovered videos from a UAV and helicopter that indicates something very strange.

The UAVs were following the bus Natan-Zada was on - before the attack even happened. 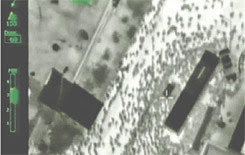 The police have made a point of stating that they did not have any UAVs at the time and the aerial videos are not from them, meaning these belonged to one of the Intelligence services.

The lawyer is claiming that the video indicates that Intelligence forces had very specific information ahead of the attack and were tracking Natan-Zada that day - from the start.

The prosecution is now trying to prove that the videos were taken after the events of the day - because otherwise it means people in the Intelligence service knew something bad was about to happen. (And that implies more than just champagne).

Why is that a conspiracy theory? It seems like the people flying the UAV had good intelligence that somebody was going to do something in that town.

It would be hard to believe that nobody had any idea that such a thing would happen.

But just cause you have a hunch or some info doesn't mean you have enough to act on it.


btw, sillyssw is the word verification I have to type in... coinicidence?

Google's translation of the Lawyer's names is funny.

1. How did the police get to Natan-Zada so fast AFTER the attack;
2.Why did they get chased off? Didn't they have weapons to fight off the arabs? After all they were in the bus; and they could have just driven off?
3.Were the police the same who were following the bus?

If you have listened to the interviews of Mosab Hassan *Yousef, the person and book "Son of Hamas", he speaks of his undercover work for the Shin Bet from the age of around 18. He spoke about how they created operations that looked one way, but were actually accomplishing something else. I don't think we are trained to think like the Shin Bet for the myriad operations necessary to fight the terrorists.

"Yousef is the eldest loving son of Sheik Hassan Yousef, and spoke about the loving home he came from. However, he speaks of the evil that is Hamas.

Anonymous: It seems like the people flying the UAV had good intelligence that somebody was going to do something in that town.

Excuse me? "Somebody" was going to do "something"? Did you read the article (or the post)? The UAV's camera was following the one particular bus that Natan-Zada was riding! You haven't offered any plausible explanation for that at all.

"Excuse me? "Somebody" was going to do "something"? Did you read the article (or the post)? The UAV's camera was following the one particular bus that Natan-Zada was riding! You haven't offered any plausible explanation for that at all."

How many buses go from where Natan lived to that town?

It's not like this was the middle of Jerusalem.


Also, I wonder if after having a Jew commit a terrorist act, how many police officers would be willing to make matter worse by pulling out a weapon and shooting upset arabs.

No conspiracy and no shoes.

The lawyer _claims_ that the videos were shot before the attack. The prosecution denies that.
It's just a claim and not a proven fact.

He'll have to prove that. I haven't seen the video, so I can't know. But since I'm not into conspiracy theories, I'll bet he's wrong. He probably confused it with some other bus.

Ariel: The Haaretz article claims that not only do we see the bus before the attack, but during and after as well.

I read the article three times and still didn't see anything like that.

Could you please cite where exactly the article says that?

I think the implication here is that the intelligence agency allowed this to happen in order to stir up anger against settlers and build support for the disengagement from Gaza.

Ariel; Translation: Yesterday, the photos from the UAV and helicopters were publicized, taken from the skies of the city of Shfar'am -- before, during and after the attack.

The lawyer who revealed the existence of the films says you can clearly see the camera following the bus that had passenger Natan Zaada in it. After the attack, you can see the Shfar'am residents surrounding the bus.

But that's my point. It does say that there is footage of Shfar'am even before the pigua; But it is the _lawyer_, not the reporter, that claims that the bus was actually being followed. This remains to be proven.

In addition, we have the following, confusing quote: "The prosecution seeks to clarify that the UAV photos were taken a long time after the attack occurred and not before". So even the fact that there is footage from before the pigua is contested.

In short, let's wait and see what the judge has to say about this.