Yesterday morning, (Monday / Shushan Purim), a Jewish security guard patrolling the "City of David" neighborhood just outside the walled Old City of Jerusalem was shot at 6 times and wounded in his leg by terrorists.

He was shot near the Jewish home "Beit Yehonatan".

And how did YNET headline this story? 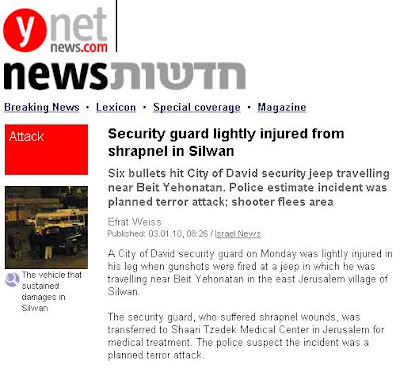 Can you imagine for a second what the YNET headline would have been if a PA policeman had been shot in the Jewish area of Hevron?

YNET will claim their headline was factually correct...and that it was in fact, shrapnel that wounded the guard, regardless of the terrorist who shot the bullets.

This reminds me of the Microsoft technical support joke.

Except in the joke, Microsoft's support is technically correct, but completely useless.

"Yediot Achronot"(while still the best around) has become left wing for more than ten years. I have sometimes thought just to buy haaretz which I know is left wing instead of yediot which slips left wing stuff under the covers. I don't know why they were so much better in the 1990s

yes - distressing, this is the least left-leaning mainstream news source in Israel and they're just.... off.

With all due respect I beleive that Yisrael Hayom is the least left-leaning news source and as the second-largest daily (by # copies printed) it deserves "mainstream" status.

The only things holding it back are the fact that it's given away for free and that its success is scaring the other papers.

I like Yisrael Hayom if only for the fact that it scares Yediot...

As an MSM paper, its not that bad, and far less yellow than Yediot and Maariv.