This came from the Jewish Journal. Not very creative. Nor clever. I've seen better in elementary school newspapers. 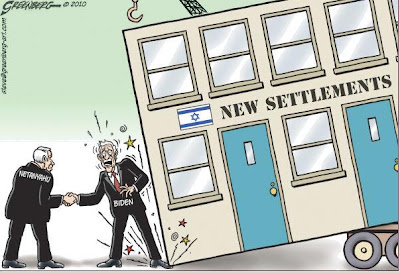 This came from the Moderate Voice. Yawn. Reminds me of the same anti-Israel cartoons when Menachem Begin was Prime Minister and we were in the middle of the "Peace for Galilee War" 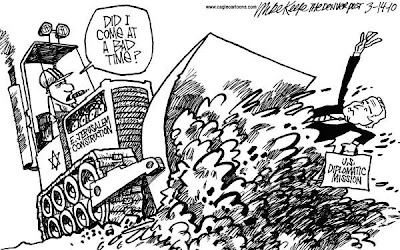 This doozey comes from Korea -- the bastion of peace in Northeast Asia. The Israeli flag on top of Netanyahu's hat is extremely sophisticated. 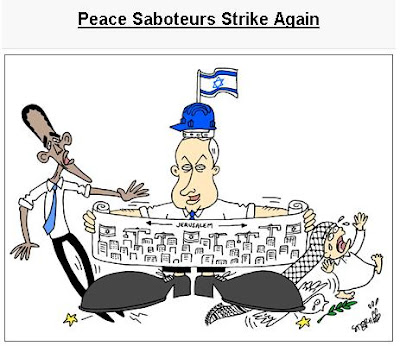 Finally. A much more entertaining and realistic view of the situation, which demonstrates our new family relationship.

Yisrael Hayom wonders why Obama is so offended by a mistake -- which Israeli apologized for over and over again. If this mistake really infuriated Obama, he must consider Glenn Beck worse than Osama Bin Laden. 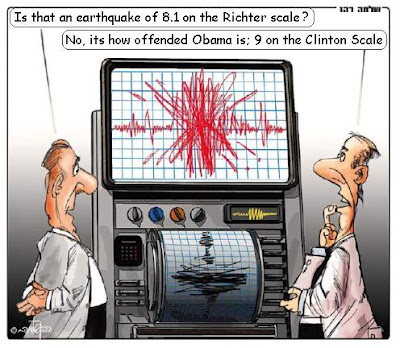 Rotter Net produced this one...yet had they used English instead of transliterated Hebrew, it might have been more effective. Putting Nasrallah and Ahmedinijad on this simply makes the poster a poor political statement and weakens the entire poster. Disappointing, considering all the work that went into it. 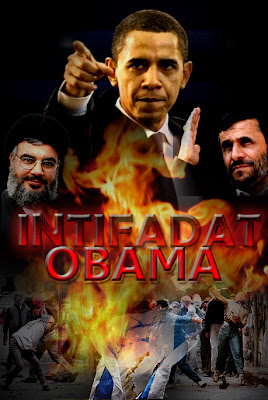 I don't know, the music might make the outrage more pleasant. *badumch*

Howdy Jameel, calling Korea a 'bastion of peace in SouthWest Asia' is more than a little baffling. My map shows them as being a bastion of kimchi in NorthEast Asia.

They are southwest of Kamchatka, that is true. But really, that isn't saying much.

Again, bastion of kimcheese. North east. Kinda like the Maine of Asia.

Both: It was one of those dyslectic map reading days. I'll fix it :)