Outraged over the killing of a Senior Hamas Terrorist in Dubai, and the alleged use of Australian passports by the Israeli Mossad, Australia dispatched their own "Hit and Run Squad" to Israel.

After arriving in Israel, the 3 police agents went directly from the Ben Gurion airport to the Australian embassy in Tel-Aviv. After 2 few hours, the agents drove off in search of interviewing the Australian national,s whose passports were forged and used by the Dubai Hit Squad.

While driving away from the embassy, their diplomatic-plated car hit an Israeli cyclist, knocking her to the ground.

The Australian agents fled the scene without stopping, without offering any assistance, and without even inquiring as to the extent of the cyclist's injuries, which they caused.

We have obtained the following photo of the Australian Police agents -- if you see them around Israel, excersize extreme caution, as they are considered extremely rude and immoral to be part of a "hit and run" squad. 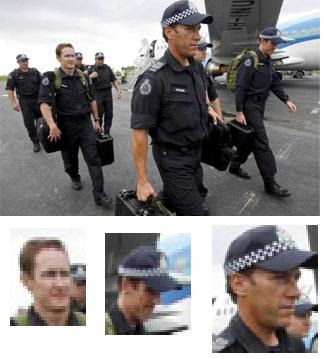 1. send the photos to interpol please -
2. How do we know these aussies did not used forged passports ? I heard their names are:
a) Mosheh Cohen
b) Shlomo Shalom
c) Israel Ben-Avraham
3. Beware...

While driving away from the embassy, their diplomatic-plated car hit an Israeli cyclist, knocking her to the ground.
The Australian agents fled the scene without stopping, without offering any assistance, and without even inquiring as to the extent of the cyclist's injuries, which they caused.

Clearly, this was simply a botched attempt at a "revenge hit".

I understand that the bicyclist whom they struck is alive and well.

Obviously, the Australian police have nothing near the efficiency of the Mossad...

ah! this is why i keep coming back to this blog, i can never tell if you're joking or not. is this a genuine scoop? i don't see any links. if it's true, well done! if it's a joke (you never know around here b"h) it's not one of your funnier ones.

They should immediately be picked up and escorted out of the country for their criminal action. Australia should be requested to release their immunity so they can be put on trial.

Hit and run is a crime punishable by jail time. It should be treated with the seriousness of the event. The rider could have been killed.

Their intent wasn't to injure anyone. They were just trying to fit in by displaying poor driving skills.

I'm embarrassed to be an Australian.

Anyway.... since the Australian PM Kevin Rudd blasted Israel for the passport thing, his popularity has dropped and he's even more disliked than ever. He was upset about the fact that one of his ministers was indirectly responsible for the death of 4 young boys who were installing insulation in a totally botched "insulation scheme", and he decided to change the subject and go after Israel instead.

Kevin Rudd's credibility is going downhill fast.
(don't blame me, I didn't vote him in)

What a bunch of crap. The cyclist spoke to the paper first and not Tel-Aviv police? Gimme a break. I'm sure the heavily used CCTV will show otherwise.

Also one of the AFP investigators was a woman and this is obviously a shot of more than 3 (there are 6) AFP officers. And you are telling me they would come off a plane in their uniforms?

If you're going to base your story on a falsification at least have the decency to do some research.

"Factfinder" must have really woken up on the wrong side of the bed this morning, and let his glasses off as well.

The "research" photograph is from Iranian Press TV. If you doubt its authenticity, then why the hell is Australia so upset that Israel allegedly knocked off a Hamas terrorist who is funded by Iran?

And all the reports came from Israel Radio and TV. If you don't like their reports -- your beef is with them, not me.

Don't shoot the messenger (unless of course, you're an Australian policeman who wants to then hit and run).