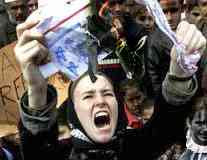 In a historic first, both a Denny's and International House of Pancakes opened in Ramallah yesterday. This event is so unusual that they decided to name the square where the restaurants will open after the patron saint of pancakes (see photo at right). 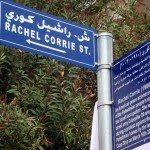 There is no news as to which syrup her parents ate with their pancakes. 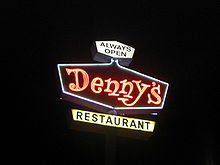 Historical Oddities:
Despite the common misconception, the Muqata did not come up with the pancake concept - that was created by her Leftist Anarchist friends. The Rachel Corrie Memorial Committee held their first pancake breakfast at Denny’s Restaurant (not an IHOP) on Sunday March 12, 2006 10 am. 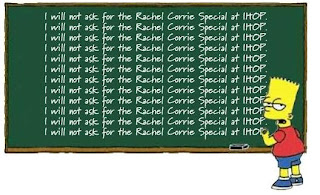 in spite of my willingness to engage the corrie issue seriously if anyone wants to, this is one of the funniest things i've ever seen here. lol, etc.

This is disgusting, a new low- and worth a good 1000 votes in the "Throw Joe Off the Blog" poll.

That's a poorly drawn picture of an American flag Rachel Corrie is burning.

No talent lost there.

I'm starting a collection for a D-9 to be present at the IHOP, to make the 'flat as a pancake' dream come true for all concerned...

Unfortunately, I have low expectations that either restaurant will be putting Rachel Corrie Memorial Latkes on the menu for Channukah...but we can always hope. I like them with sour grapes...I mean sour scream...er, sour cream.

okay, guys, this was really in poor taste. Funny as all heck, but in really poor taste. i mean, the poor girl was completely deluded, but she really thought she was doing good.

(I know b/c someone I care about has been brainwashed by ta'ayush :( )

Are you in any way insinuating a correlation between their 'patron siant' and 'flat as a pancake' as a self-fulfilled prophecy from 2006?

(stretching it a bit)

the poor girl was completely deluded, but she really thought she was doing good.

She willingly and deliberately chose to accept one side's arguments, uncritically, and without question.

She was a stupid &*nt who was responsible for her own fate. Like so many of the %$$holes who joined the ISM.

Now, can we stop talking about the poor dumb dead beast?

Did they really have a pancake breakfast for her? Do you have references? Those pancakes were in really poor taste.

There must be some reason that the folks who join the ISM care more about Arab Palestinians than about Chechens. Even though the people in Gaza are doing much, much better than the people in Grozny. I think part of it is just the Left in the universities. Evergreen College, where Rachel went to school, is a very left place. They emphasize progressive culture over academics.

The forgotten person in all of this is the dozer driver, who in all likelihood had no knowledge of the event until it was long over. If they could have proved malfeasance, the GOI probably would have been glad to heap all the blame on the driver. Israelis with great protexia usually don't drive bulldozers.