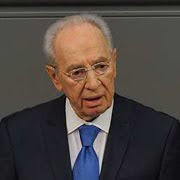 "I would say it only half jokingly, but if I really did have the ability, [I would say] all Jews should observe Shabbat, so that they should only work 6 days,a week as commanded by the Torah."

Peres made this statement at the IROX high tech company in Bnei Braq which employs 80 Ultra-Orthodox women.

Peres continued: "In this company, women are employed. I hope this will continue that men will be employed here as well, provided they have the appropriate work conditions for them.

Torah students have amazing minds. Many secular Jews go to exercise gyms, while the religious go to yeshiva, a spiritual gym. You teach your mind to think and deal with challenges. Many religious Jews have become scientists.

Earlier in the day, Peres visited the Ponovitch Yeshiva and spoke to students and the Roshei Yeshiva. Afterwards, he spoke to R' Aharon Yehuda Leib Shteinman from Bnei Braq, during which radical Chareidim threw rocks at Peres and R' Shteinman.

No injuries were reported.
If he's calling for segregation in the work place, maybe Peres will endorse segregated mehadrin buses as well?

This should not be surprising as Peres has been known to tell people what they'd like to hear. This is one reason that he has climbed the ladder of political success, he tells people what they want to hear and they think he's someone special. Problem is when his words to one group are compared to his words addressed to a group of different, opposing and contradictory values and orientation. Peres is a political cameleon.

Rabelad is right. Peres is a long-lived chameleon who changes colors rapidly and effortlessly to appease whomever he faces at the moment. His words sound very good in this case; but are empty and inconsistent with his life and career. I don't pay attention to anything the man says. He has no principles that the public can hold him to.

Peres is a real joker.

He tells people they should keep Shabbat.

Why did he forget the commandment not to commit adultery?

Why do you think his wife left him?

Plus, to preface the entire thing with "I would say it half jokingly", takes any validity he might have had in saying it right out the window.

May the Heroes of Irgun be blessed said...

Moshe Sharett warned us what would happen if this man would arise to power in israeli politics... Dark days for bnay Yisrael... we have endured his major damage, we live on, but we do not forget..... His lies mean nothing.

Was this after he visited the BB Rabbis? What pressure might they be applying to him, that he should say this (perhaps to appease the Rabbis)?

Does he have the same problem as Clinton?