Ready for the Korban Pesach?

Do we really yearn for the Beit HaMikdash and Korban Pesach?

The following cartoon by Shay Charka summed up our post the other week on R' Metzger's thoughts on the Beit HaMikdash:

"We don't have any plans to go up to Har Habayit.
We aren't planning to build the Beit Hamikdash." 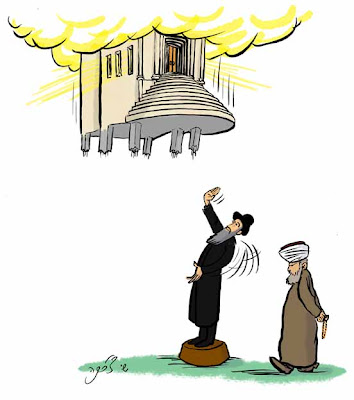 Responding to a petition by groups demanding the right to perform the Korban Pesach on the Temple Mount, the Israeli Supreme Court rejected their lawsuit.

Israel's police argued that Jews praying and sacrificing the Korban Pesach on the Temple Mount would constitute a “major threat to public safety and order, especially at this time.”

Israel's Supreme Court stated that while Jews are entitled to freedom of religion, their right to pray and worship on the Temple Mount, "is not absolute."

I guess it's only absolute for the Arabs.

Still hoping for a Korban Pesach this year.

Still hoping for a Korban Pesach this year.
!אמן כן יהי רצון
Shabbat Shalom and Chag Kasher V'Samei'ach to you and your family.

This is so cruel and depressing.

Jews are still the only people in the world where nobody gets upset if we are told we can't be somewhere.

Native Americans also really don't care about time and if one can make it or not. Shalom

Jews can't get upset about being denied by the secularists who run Israel to perform the korban pesach - or should they be?

As long as the Temple is not rebuilt and the sacrifices are not resumed, Judaism will be an incomplete soul without the right vessel from which to pour out its holiness to the world.