Jameel and I were discussing the grave issue, hopefully for the last time, so we can say some last words, and finally put it to rest.

One good reason for not wanting to move graves in Israel is because the rest of the world will look on at us, and use that as a precedent for moving/destroying their own Jewish cemeteries.

Permitted or not permitted is not really the issue in this case.

Of course not. There are cemeteries there that go back hundreds, if not thousands of years. It’s our history. 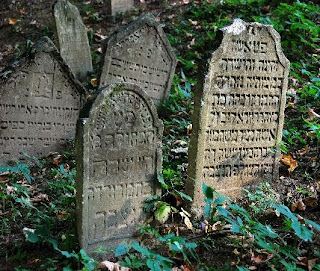 But there is a solution.

Imagine if the State of Israel could offer a service to all these European nations.

“You’ve got prime real estate in Poland you can’t develop because there are Jewish graves there? Not a problem at all.”

The State of Israel can offer cemetery relocation services to these European countries.

Each cemetery would be carefully dismantled, the graved honorably disinterred in accordance with Jewish law and the bodies and gravestones would be airlifted back to Israel, for a Jewish reburial in Israel.

No rabbi would deny that moving a grave to Israel is fully permitted.

A section of the Negev could be designated as the "New Europe Cemetery".

Each cemetery and grave would be laid out exactly as it was in Europe.

And Israel would charge for this service, and the builders would be happy to pay to gain access to the land without any political/religious fallout. And there would no longer be risk or threats of the destruction of Jewish graves.

In fact, Israel could even demand that foreign governments hire their services for high-risk cemeteries that get repeatedly attacked in anti-Semitic acts.

And in Israel the benefits would be threefold. First, the profit was the relocations services could be tremendous. Second, imagine having all that genealogical research information available in on spot. And most importantly, tourism.

Anyone who’s gone touring in Israel can appreciate the phrase “Caves and Graves” - because that is what most tours seem to be.

Now imagine having the draw of the largest Jewish cemetery in the world made up of some of the oldest graves from Europe!

Now that would be some tourist attraction.

Israel and the Jews could only benefit from this.

The only city we can think of that would not want this to happen is Uman. They would lose all their Breslev traffic.

Good idea, but relatives of those being disinterred may object. (You may not object to moving your relatives' remains to Israel, but not everyone shares the same view.) One objection may end up holding up moving an entire cemetery.

Sorry, I don't agree with your reasoning for not doing it. You say that Europe will take this as a precedent to move their Jewish graves to build various real estate developments. You say that would wipe out this part of Jewish history. That's only a valid assumption if you could point to examples of Israel moving graves in a defamatory and disrespectful way and destroying the graves in their attempts to build new projects and do it at the expense of the respect and dignity of the dead. That's the exact opposite of what has happened whenever Israel has come across graves during construction projects.

What you seem to be saying is that you're basically assuming that not only would Europe use the precedent of Israel grave relocation, but they would also use it as an opportunity to desecrate the graves while they move them. If they were to do such a thing, you can't blame Israel for setting that precedent by moving graves when a) it's something that's been done many, many times before this, and b) Israel has never desecrated any graves that they have moved, regardless of whether those graves belonged to Jews. If Europe is going to desecrate the graves or relocate them without the consultation of the local Rabbinical Council, that's their violation, and no blame can be placed on Israel for that.

Furthermore, the bodies themselves are what's sanctified, not the location. And the history behind European Jewish cemeteries is in the tombstones and the bodies, not the location. They would be just as historical in another location unless you were referring to the mass graves of the Holocaust, which it doesn't look like you are. As long as the graves were moved in accordance with Halacha and dignity and passed the OK of the Rabbinical Authority, I don't see what the problem is.

If these cemeteries are our history, why doesn't the world Jewish community do more to protect them? Many Jewish cemeteries in Europe, especially in places where here are almost no or no Jews left, are already extremely neglected. Why wouldn't they want to build over them or move them? Nobody cares or takes care of them.

Why is Israel constantly held responsible for the actions that other countries do to their Jewish communities? The precedent Israel has always set in this matter is one of dignity and respect. Europe could actually do well to follow that lead.

I would also point out that there already is a long historical precedent for Jews to move graves to make more room and for building. It goes back thousands of years.
-OC

I would also point out that there already is a long historical precedent for Jews to move graves to make more room and for building. It goes back thousands of years.
-OC

That doesnt seem to matter to the UTJ or MK Liztman.

it would also make the planned hareidi city in the negev more attractive.
problem is that the foreign govts may not want to give up the graves since they are a huge tourist draw.

Those that they want to use for building space, they can relocate to Israel. And those they want for tourist attractions, should be respectfully maintained.

I respectfully disagree with you all. The founding and continued developement of Israel has already shifted the attention away from Europe and the East to a great extent. Yes, for now there are still historical tours and pilgrimages; but I daresay that in another generation or two it will be largely ignored. Exile is not a memory to be perpetuated.

The navi uses a description that Hashem will no longer be thougt of so much as the God who took us out of Egypt, as the God who brought us to the final redemption. Of course, that doesn't mean that the Exodus from Egypt loses its central role in our history and religious memory. It does mean that our perspective will shift. There are midrashim that amplify this point.

Similarly, I would suggest that the importance of places in the Exile that are already largely left behind, are fading in importance. Time wears away at that role and importance as surely as water wears away at a rock.

This is really a great idea. You need to anonymously forward this post to Haaretz or something.

Seriously, why hasn't this been suggested before?

There is only one major difficulty I can think of. The soil in Europe is very different than the soil in the Negev, and it might be difficult to keep the cemetary the same in that case.

Also, There might be a problem with the number of graves in Europe being larger than the entire negev area.

Lastly, some cemeteries have graves going down 6-10 people deep. Does that cause logistic issues?

It sounds like a really bad idea to fill up the country with dead Jews. We need the land for the living.

I was referred to this article by a co-worker. I cannot disagree more with this idea or with the comments made by Mr. Scher above. There are millions of Yidden who maintain strong emotional ties to the countries and cities where our ancestors and great tzadikim lived and are buried. The great Yeshiva of Chachmei Lublin in Poland is again a functioning yeshiva.
The beis medrash of the Minchas Elozor in Munkatsch is again a functioning shul. There are active kehilos throughout Poland (including former Galicia), Hungary, etc. The great majority of Yidden who are in these cemetaries went to their rest quite content to remain until beas Moshiach and techiyas hameisim. This is especially true of the great tzadikim - no one would dare touch their holy bodies and none of their descendants would ever agree. These are our parents and great grand parents etc you are talking about - not another tourist attraction for the israeli state.

At the time techiyas hameisim the holy bodies of Jews buried in Poland (including former Galicia), Hungary, etc. will have to painfully roll through the ground until they reach the israeli state where they will undergo techiyas hameisim. This awful pain will be part of their tshuva for not being buried in eretz yisroel.

If only their descendants had the foresight to reinter the holy bodies of their ancestors in Eretz Yisroel, they would be able to save them that terrible paid.

Anonymous, I think all the Jewish cemeteries in the world would occupy a tiny bit of the Negev.

Simcha, please define "functioning," which you use twice, and "active." The total number of Jews in these countries is minuscule.

Anonymous, you should see what the Gemara says about people who die in Chutz LaAretz and are brought to be buried in Israel. :-)

Exactly, Mordechai. I mentioned that in my post. The Jewish cemeteries in Eastern Europe and other European countries where, thanks to good ole' Hitler and communism, there is almost no or absolutely no Jewish presence are completely ignored and neglected. In my mind, there's no precedent for the Europeans to use. The only times when we've heard disputes about graves being moved is when the Polish government or private investors have wanted to build over Holocaust sites and memorials to build shopping malls or other developments. I am sure that there are plenty of Jewish cemeteries in Europe - ones that have been totally neglected - that have been built over than nobody knows about because nobody cares.

Let's not kid ourselves here. The UTJ is not griping over this out of fear that a dangerous precedent might be set for the rest of the world to follow. It's about money and power like it always is in politics. Pure and simple. The head of the UTJ might be a Rabbi and wear a big black Kippa and streimel, but he's a also a politician, and his motives here aren't religious or pure.
-OC

Anonymous 7:19: Your expression "israeli state" instead of "Eretz Yisroel" is very revealing. Please see the Zohar pr. Teruma daf 141 about those who live in C"L and are buried in E"Y. I believe Nachum may be refering to this.
Nachum: Functioning means daily minyonim. For example, in Munkatsch, the re-dedication of the beis medrash and the increased travel of Yidden from America and E"Y to visit the kevarim there has re-awakened the consciousness of many Yidden who assimilated during the communist years. Similar situations are occurring in Poland.
Bottom line in this inyan for me and many - the leaders, politicans even rabbis of the Israeli / Zionist state are not the "baalei botim" of Klal Yisroel - as much as they pose themselves as such to our great misfortune. They cannot and will not determine the future of Europe's Yidden - alive and dead!

"Anonymous, I think all the Jewish cemeteries in the world would occupy a tiny bit of the Negev."

One of the cemetaries in Chernivtsi is 140 sq Km

If there are just 96 other cemeteries the same size, then the Negev would be too small.

Turn Israel into a giant graveyard? Thank you, but no.