While the conversion law amendment [spell check can be so annoying sometimes, thanks Abbi!] proposed by MK David Rotem is an interesting topic, I wasn't going to post about it. Yesterday, a friend from the US contacted me and said they desperately needed the actual text of the proposal and they couldn't find it anywhere. Looking around on the web, I was surprised that the text didn't appear anywhere, except as assorted quotes in newspapers.
First a bit of background.

MK David Rotem proposed the bill. Rotem's a religious MK in the Yisrael Beiteinu party who lives in the community of Efrat. He attended Jerusalem's Yeshivat Horev's elementary and high school, holds a law degree from Hebrew University, has the rank of Lieutenant in the IDF (reserves), and is married with 5 children.

As reported in the press, his proposed legislation is:

Rotem aims to simplify the current conversion process, by having the Chief Rabbinate grant regional rabbis conversion authority, on top of its conversion courts.

The main purpose of the bill is to facilitate the conversion of thousands of non-Jewish immigrants living in Israel. Rotem also proposed that once a conversion is recognized by the state, no religious body would have the right to overturn it. (YNET)

When the bill was discussed in preparation for its first vote, the discussion got slightly heated.

Rotem introduced bill by saying, "When I reach the world of truth, after I pass this bill, I will brag about it and will be granted access to paradise. Whoever blocks it – I don't know what he will receive."

MK Moshe Gafni (United Torah Judaism) shouted at him: "You are uncultured and are ruining the nation, and still you call yourselves the Right in Israel"

Labor MK Eitan Cabel interrupted and told the Gafni: "I don't want to be in the next world with you anyway."

Rotem spoke harshly against those who oppose the bill and their rabbis: "It seems that United Torah Judaism is the largest party in Knesset. It is known that Rabbi Amar has already signed the agreement and Rabbi Ovadia has welcomed it. They did not believe there were any problems, but it seems there are other rabbis in Israel whose arms have been twisted."

MK Cabel stressed that his party also supports the bill: "It is difficult for me to say a good word about your actions," he told Rotem, 'But the Labor Party, at least in this matter – gives its support. I certainly hope that you and your party have the courage to complete to move. We are tired of you dribbling around the court and threatening us. If you mean it, then do it."

So, we have the Sephardi Chief Rabbi, R' Amar supporting the bill and Aguda calling it a catastrophe. The Labor party supports is, yet the Reform movement in the USA has stated:

This legislation will certainly reopen one of the most divisive battles in the Jewish community. The proposed legislation will lead to a situation in which Jews-by-choice would be treated differently and denied recognition as Jews under the Law of Return, in direct contradiction of Israeli Supreme Court rulings. Additionally, it may lead to the delegitimization of all non-orthodox conversions performed outside of the State of Israel. (Union for Reform Judaism)

I find it fascinating that this proposal puts Reform Judaism and UTJ/Aguda on the same side of the fence, pitted against Israel's Chief Rabbi, MK David Rotem, the Yisrael Beiteinu party, the Likud, Labor and Kadima.

Confused? I googled everywhere for the actual text of the proposed amendment. Its not on the Yisrael Beitienu website. A friend in the government couldn't find it either -- though he noted my request is now becoming more and more common.

The Knesset Website's archive has no record of the current proposal. Its search engine returns a previous version from July 21, 2009, but not the current one. The protocol for the committee meeting has not been published [see screenshot below], and the background for the meeting (which was the text of the updated law amendment for the debate) has been deleted from the Knesset's website search database for the Law Committee's database. 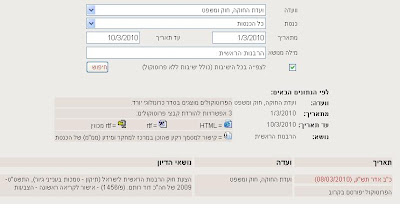 However, Google Search is your friend! First I found a reference to the meeting.

While this version is in google cache, we can see it's been modified. The original meeting, with its background reference material, is ALSO in google's cache. Using the bill's reference number, 1456, I found the uncensored version of the meeting's schedule, with a link to the actual text of the law used in the debate! Meaning, that while the Knesset (for whatever reason) has deleted the links to the current version of the proposed amendment and any reference to it, the document is still on the Knesset website.

I'm putting it in my google docs as public access in case the Knesset deletes this version as well.

Makes you wonder why it was deleted. I bet because Shas and UTJ/Aguda threatened the government, so it was intentionally removed for the time being.

Yes, i definitely think we need a conversation law amendment. Any chance the law will get Joe to shut up?

Seriously, I'm trying to figure out why Reform would support a bill that would forbid converted Jews to make aliya under the law of return.

Abbi: Nothing can get Joe to shut up :)

I dont understand why Aguda is so against the bill.

I usually like your exposes, but I think that when you get it wrong it weakens the strength of those you get right.

The proposed law it right on the Knesset website, where it should be (there are different stages to proposed laws, so you have to make sure you're in the right place).

Go to http://knesset.gov.il/privatelaw/plaw_display.asp
where you can search based on different factors. I searched by name of MK - Rotem, and scrolled through until I hit the relevant proposal. It's there, in a Word Doc.

Let me know if it doesn't work for you (It also doesn't work using Google Chrome. I'm not sure about Firefox, but it worked with IE).

Jeremy: Did you actually read the document you linked to and provided?

Did you see the date on it?

In the document it states:

That was not the law proposed this past week.

The updated bill which I provided, was the link I provided, clearly states at the top of it:

This was the updated bill that voted on.

I'm sorry you feel "I got this one wrong and that it weakens the other exposes" -- but I would welcome you trying to find the document I linked to (and published in google docs) anywhere on the Knesset web site through its search engine or if it were published anywhere.

In fact, I'd really appreciate showing me how to find this document -- this exact bill (1456) which was debated this past week in the Vaadat Chuka Chok uMishpat, in the Knesset on 8/3/2010...since no one I asked could find it.

The document you provided is not that.

I saw the link you provided yesterday as as well, and the first thing I thought was, this cant be the right document...its 6 months old)

Sorry I didn't read it, it looked similar but you're right, it's not the same law proposed then.

All I can say is that the Knesset website is missing all the bills proposed last week (Tues through Mon).

Interesting Update: Yesterday, the "background" information search on the Knesset site showed no information for this particular debate. It was just published this past hour, with an additional link that doesnt appear in the original listings.

Position paper of the Reform Movement.

They also now just put up the updated bill's link which (till an hour ago) was deleted.

I find it fascinating that this proposal puts Reform Judaism and UTJ/Aguda on the same side of the fence, pitted against Israel's Chief Rabbi, MK David Rotem, the Yisrael Beiteinu party, the Likud, Labor and Kadima.

You should use Google translate to translate the bill as a second google doc, just to show how cool google is!