When it comes to defending Arab lawlessness, Haaretz is always at the forefront.

"Several children in the East Jerusalem neighborhood of Silwan were arrested and taken from their homes in handcuffs in the middle of the night over the past few months, as part of a police crackdown on suspected stone-throwers, several teenage residents told B'Tselem and Haaretz.

Haaretz and B'Tselem, the Israel Information Center for Human Rights in the Occupied Territories, collected testimonies from several teens that suggest the police are treating them violently and violating their rights.

"They told me to get down on my knees and slapped and kicked me, one from behind and one from the front," a 15-year-old told B'Tselem. " (Haaretz)

Of course, when Israel's police did the exact same thing, and worse to settler kids during the Disengagement (who didn't throw rocks, but were accused of blocking traffic), or general harassment of settler kids who get arrested by the Shin Bet and dragged off for interrogations in the Shin Bet underground dungeons, (btw, those kids were released with zero charges against them, as they had real alibis) you never see similar headlines or even articles by Haaretz.

Can you imagine a headline, "Israel using strong arm tactics against young settlers"

Its a shame that Haaretz reporters have never been on the receiving end of Palestinian stone throwing. Here's a photo I took a few months ago, when a Palestinian youngster threw a harmless rock through the windshield of a car. The driver is still recovering. 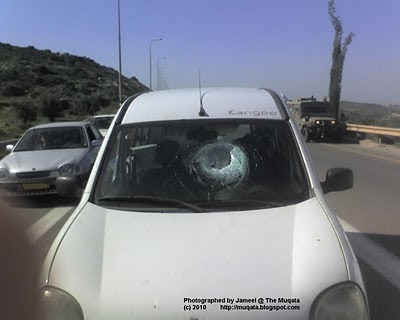