We don't think we can say it in any simpler words than this, "Rabbi Yona Metzger's statements do not represent me."

At the Hurva ceremony he made the following statement in an attempt to warn/appease/calm the Arabs: 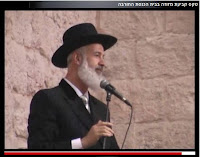 "We don't have any plans to go up to Har Habayit. We aren't planning to build the Beit Hamikdash."

I don't think we can emphasize enough how much we disagree with him on this matter. And how shocked we were to hear him say it.

We, as practicing Jews, as Jews who this Rosh Chodesh (which is in fact right now) will be saying in our Mussaf prayer מזבח חדש בציון תכין (Establish a new altar in Zion) and ובעבודת בית המקדש נשמח כלנו (And with the Temple services we will all rejoice).

It's clear that 2000 years of exile have caused irreparable damage if a Chief Rabbi of Israel can disassociate himself from the Temple, the Temple Mount, and aspirations to go up to Har Habayit and to rebuild the Temple. 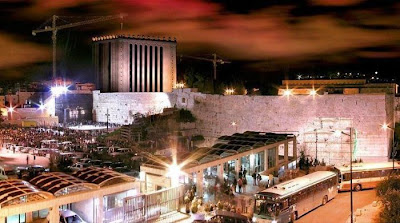 Picture by Koby Aharati (we think)
Rabbi Metzger follows up and says "God's Temple will be established by Your hands".

Clearly he subscribes to the opinion that the Third Temple will only come about through an overt miracle from God. And that's fine.

But as he tells the Arabs to calm down, is he too embarrassed to tell the Arabs where exactly God will establish this Third Temple?

Or perhaps where is not important, because he seems to strongly imply that God won't be establishing the Temple any time soon anyway, so there is no cause for their alarm.

It's our theory that God is certainly not going to give us something as important as the Third Temple (neither to let us build it or to drop it down from the sky), if we haven't internalized, and won't verbalize, how much we actually want and need Bayit Shlishi - now.

We want to go up to Har Habayit. We want the Third Temple established there as soon as possible. This is what we pray for in all our established prayers. This is certainly part of what kept us going through 2000 years of exile. We Jews need it. The world needs it.

We can only hope that this post is at least a partial Tikkun for what was said today.

The dedication ceremony can be seen in totality here in the first video. Rabbi Metzger's comments can be heard in the second video at the very end of his speech (which is at the end of the video).

"We aren't planning to build the Beit Hamikdash."

Perhaps Rabbi Metzger was trying to find common ground with the Reform movement.

Have you seen this picture?

Yeah, we should all totally go up to Har Habayit, like now, and start demanding that we want to build the Third Temple there now. That's the only thing we can agree with, right. Eyeroll.

I write this comment anonymously as I find myself embarrassed by my response.
I too pray every day for a return to Zion and a rebuilt Temple. I too will confirm that the Avoda is clearly an integral and central part of our religion and life that we have been deprived of. I can not deny that when we ask for the Moshiach, we are asking for a rebuilt Temple and a restoration of the Temple service, and we are asking for it to happen as soon as possible.

Yet, outside of the T’fillah, I am embarrassed to say this out loud!

Even as I write the first paragraph, I write it as an intellectual statement, not an emotional one.

I know it is true, yet I feel hypocritical as I write it.

If someone would approach me on the street and ask me if I want to see the Temple rebuilt today, my immediate response would be to noticeably pause and internally consider the life-changing consequences, and then answer in the affirmative – not really because it is intellectually true, but primarily because it is not likely to happen anytime soon, so the answer has no emotional or life-changing significance.

I know this is the result of 2000 years of exile on our Jewish mentality. I suspect this mentality permeates many other fellow Jews. I know that if it were up to me, the modern state of Israel would not have arisen 60 years ago. And it is only because of the miracle then, that I can live in Israel now. A simple unremarkable miracle for me now, but the results of the difficult efforts of Jews who actually integrated this belief into themselves then, and worked to make it happen.

I don’t believe our Temple will be any different.

The Temple will be rebuilt by the efforts of more firmly believing Jews, Jews who have integrated this emotionally not just intellectually, and the rest of us will benefit from the miracle performed through their hands - perhaps not fully appreciating or understanding what had to be done to make it reality.

What does it mean to pray for something, if you do not really want it?

I pray for what I want, and I want it. I want the Beit HaMikdash to be rebuilt.

I am not a petulant two year old, nor am I some crazy fanatic. I am a religious Jew, and this is what we pray for every day.

Our religious leaders should be demanding religious freedom, and full access for Jews who want to go up to Har HaBayit!

Our spiritual and national yearning for our Beit HaMikdash is fundamental to our prayers.
How can someone who denies this essential desire be our chief Rabbi? I would not even want him as my Shaliah Tzibbur!

RikvA are you trying to give Anon mussar? Because I think he's much further along than he says - like the people who can't sing mindlessly "We want Moshiach now" because they realize it means we have work to do.

Ten stars for this post it awakened something in me - and on R"H Nissan, too!

Well, I do not know who Rabbi Metzger represents.
No one does.

People have to ask themselves how much they truly want moshiah to come.

If they day before a woman koshers her kitchen for pesach, she hears Moshiah is here, and we are all going to sacrifice the korban pesach in Jerusalem, will she leave her house and go? or stay to finish cleaning??

I think this is a subtler issue that you're making it.

On the one hand, I agree it's hard to read the statement as it was made. It reminds me of something I once heard, that after Moshiach comes and we have the first Yom Kippur with restored avoda, there will probably be people in the crowd who will say "I miss how we used to sing "mar'eh cohen...."

That said, I think that it's important for Jews in Israel to succinctly discredit Arab propaganda. The Arabs were saying something totally rediculous, that the rededication of the Churva shul showed that we were planning to attack them on Har HaBayit. It's important to say that the one has nothing to do with the other, and that dedicating a shul has nothing to do with any plans to attack them. Clear and succinct responses need to be made that point out their BS, and I think that's all that the Rabbi was trying to do.

Dov may have a point. But considering that the Chief Rabbinate (following their Haredi and/or State masters?) fights any attempt to go up to the Har HaBayit with what amounts to halakhic lies- just look at the big sign at the entrance- I'm not too optimistic.

As to mar'eh cohen, it was written (by Ben Sira) while the Mikdash was still standing. So there's no need to drop it. :-)

Thank you, Joe-Jameel, for expressing so clearly what I thought when I heard R' Metzger's remarks.