According to many poskim, Ashkenazim can get a haircut or even get married on the evening of 17th of Tammuz...so despite getting home late yesterday from work, I managed to get a haircut at 10:30 PM at our local barber.

It's the 17th day of Tammuz -- and how did I blog it previously? 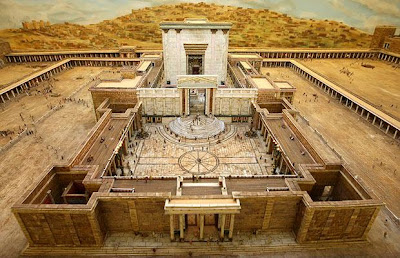 Alec Gerrard, a 78 year old from the United Kingdom, spent 3 years researching his 1:100 scale model of the Second Jewish Temple, that took him 33,000 hours to date and measures 20' x 12'. He hand painted every clay brick and tile and sculpted all of the 4,000 half inch, correctly dressed figures to populate his creation. Mr. Garrard began this project in his 40's and does not expect it to be fully completed in his lifetime (more pics here)

The Life Keeper revolutionary heart attack alert patch is probably one of the biggest scams of the century....

The many unanswered questions led Picker, a dentist and childhood friend of Prime Minister Binyamin Netanyahu, to hire the legal services of Ronel Fischer's firm, a member of which demanded that SafeSky's lawyer show the memorandum of understanding with MSI.

When SafeSky's lawyer Gabi Hyke, however, refused to show Picker such a document, the CEO announced his immediate resignation. (JPost)

The European Commission on Thursday backtracked on its unusually harsh criticism of Israeli settlements, declaring that a statement released earlier this week did not reflect the commission's position.

Hypothesis: Why do our religious kids become secular?

During a Torah lesson he delivered on Monday, the prominent national religious leader,R' Mordechai Eliyahu spoke at length about the importance of observing chastity codes. He advised soldiers to cover their ears during military ceremonies that include women singing. "It's better to go to jail than to obey the commander and hear a woman sing or play." He stated.

Eliyahu stressed that listening to a woman deliver a speech, if she did so while using hand gestures, was also forbidden: "It's very serious. One should watch out for these things."

Men and women sitting together at weddings was also banned, according to the rabbi, let alone dancing together. "Today at weddings everything is allowed – to dance, to look… a man dances with a woman he doesn't know… men swap women. This is a very serious thing!"

"Rabbis, repent!" urged Eliyahu. "Admit: Say, 'we were wrong. We won't allow mixed dancing, mixed weddings, mixed sitting'." He said that more liberal poskim (rabbis that issue halachic rulings) were favored by women, "Because a woman wants to be looked at. But men don't like them, because men know this is wrong." (YNET)

Kalman Marco, the 60 year old man who was driving near Ofra this morning when his car was shot at, says he was was miraculously saved when he managed to get to work safely. In an interview, the Nili resident said that he was unaware that the car was hit until he got out of the car in Psagot, where he works, and he saw that a bullet had hit the car. (A7)

If you're an Anglo Oleh -- you may not always recognize what your Israeli born children will be typing as their Facebook Status Messages.

Parents around the world have discovered that joining Facebook is an excellent way to keep tabs on their kids.

However, if – like me - you’re the Anglo parent of Israeli teenagers, you’re out of luck.

I should begin by noting that the quality of your Hebrew is irrelevant.

In fact, you might even BE a native-born Israeli.

But none of this matters.

You’re STILL not going to be able to understand your Israeli teenager’s Facebook statuses.

Read it here at Our Shiputzim.

Thanks for the link!

I don't agree that LifePatch is the biggest scam in the century - the media was tricked for a few days and not much money was lost. Madoff managed to scam people for years - and for alot more money.