Chardalism: We want separate buses too

As if the Ultra Orthodox "Medhadrin" separate seating buses aren't enough, R' Shlomo Aviner from the "Chardal, Chareidi Leumi" Ultra-Orthodox Nationalist camp has come out with his own position on the bus segregation.
On R' Aviner's video blog, he states:

"It's a personal issue, and of course a mehadrin [segregated] bus in which there are only men or only women is more modest. Especially when there are immodestly dressed women on the bus. Therefore, it is better to have separated buses for men and women. Sometimes the bus is full of standing passengers pressed one against the other, and sometimes, they even sit on one another, but that's not so bad."

He then cites the Talmud from Bava Batra (57b) that if a person is walking along the riverbank and comes across women who are doing laundry washing in the river (and have sleeves rolled up/or dresses/pants rolled up to keep them from getting wet, thereby they are less modestly dressed), what should the person do? The Talmud answers, if there is another way around, he should take it, and avoid the women washing laundry in the river. If there is no other way around, he can walk past the women, but not look at them. (For more on the Talmudic discussion, see here)
R' Aviner ends off by saying the bus is the same thing. You should try to have separate buses for men and women, and if its not an option, to take the mixed bus, but not to look at people...the same as walking in the street. 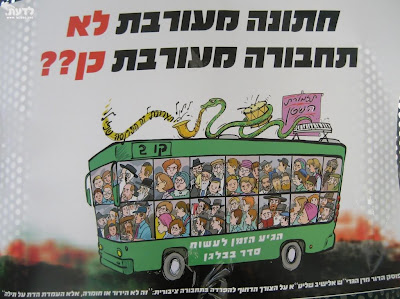 Mixed Weddings, NO
Mixed Seating on Buses, YET?
(hat-tip for graphic: Shearim)

Personally, I find the comparison between buses and the riverbank distressing, and that its an unhealthy direction for national religious Zionism to take. R' Aviner is moving far away from "Modern Orthodoxy" in Israel (though there really isn't such a thing) -- and I'm sure the Chardal movement will use this as yet another excuse to label the Religious National camp as neo-reform...for not trying to establish segregated bus lines.
R' Mordechai Eliyahu came out against mixed seating at weddings as well -- saying that mixed seating will lead to mixed dancing:

R' Eliyahu stressed that listening to a woman deliver a speech, if she did so while using hand gestures, was also forbidden: "It's very serious. One should watch out for these things."

Men and women sitting together at weddings was also banned, according to the rabbi, let alone dancing together. "Today at weddings everything is allowed – to dance, to look… a man dances with a woman he doesn't know… men swap women. This is a very serious thing!"

"Rabbis, repent!" urged Eliyahu. "Admit: Say, 'we were wrong. We won't allow mixed dancing, mixed weddings, mixed sitting'." He said that more liberal poskim (rabbis that issue halachic rulings) were favored by women, "Because a woman wants to be looked at. But men don't like them, because men know this is wrong." (ynetnews)

Several years ago a transcription of a Shiur by Rabbi Aaron Rakeffet was circulated on the Internet. Rabbi Rakeffet is a renowned author and Rosh Kollel (or at least a respected Rebbe) at the Yeshiva University Kollel in Jerusalem. This Shiur spoke to my very deeply held belief that the current move to the right is harmful to Klal Yisroel. No where is this more evident than in the area of mixed seating at weddings. It is becoming increasingly rare to find a mixed seating event and separate seating has even found its way into some weddings in the MO community. In my own children’s weddings, two of my children had a separate seating and two of them had mixed seating. I basically left it up to them as to what kind of affair to have. As an aside I would point out that at the two mixed affairs, I asked my Rebbe, Rav Aaron, if he wanted to sit mixed with his wife or separate (I had a few tables reserved for Charedi Rabbanim who I knew wouldn’t feel comfortable sitting with their wives) . Rav Aaron chose to sit with his wife and his son R. Eliyahu and his wife, and other friends and their wives.

Mixed seating is not only permissible, but in my view it is a good way to spend an evening with your wife and friends and it is a good way for young people to meet for Shiddach purposes. Rabbi Rakeffet spoke to this issue and he did not mince words. I think it is a valuable lesson for all of us to see what he said and how he said it. It is interesting to note anger and condemnation, by Rabbi Rakeffet of the Yuhara that is so much a part of the Torah world today. This is the longest post I have written thus far. It is more than double the usual length. It contains the main body of Rabbi Rakeffet’s Shiur. Only tangential material was deleted. It is long but well worth the read. So sit back, relax, and enjoy. (Read the rest here)

Seems like the Chardal camp is moving farther and farther away from normative Religious Zionism. Not the best of tidings for the 9 days of Av.


Tisha B'Av evening Wednesday, July 29 - join the Women in Green as they March around the Walls of the Old City of Jerusalem. But first the reading of Eichah will take place in front of the US Consulate on Agron Street at 8:00pm.

The Komemiut sedra reading sheet discussed the issue of seating at weddings a few weeks ago. 2 out of the 3 opinions were in favour of "family" (mixed) seating.

As for Rav Aviner, his opinions of modesty have always been like that.

Jameel - I am so happy that you are in agreement with me. Too many in the Dati Leumi world feel insecure, and ape the Charedi world in order to prove their religiosity. Public transportation is not the place for crazy chumras - the idea of women having to sit at the back of the bus makes me furious!

Keren: While those may be his own opinions, offering them to the public -- when they are unrealistic and generally not accepted will just cause more friction and issues.

WestBankMama: Hey - according this chumra, you wouldnt have to sit in the back of the bus -- you would have your OWN bus :-)

Did anyone ever hear of "methinks he dost protest too much!" (not JoeSettler)

Yesterday, I got on a tremp, and lucky to be in the front seat while the other candidates were trying to decide if it was good for them. In the end, a unrelated religious man and woman squished into the back seat where a car seat was already hogging more than 1/3. Were these normative religious people? In hindsight, the hasid in me should have offered the women to sit up front, but honestly, the two had already wasted the drivers time and it was there choice in the end to cushy up with each other at the Oranit 'machsom' which is not a bad place to wait for a tremp.


Anyway, Hardalism / 'Mercaz' / Har Hamor are gaining much more influence than 'normative national-religious' whatever 'normative' means. Does that refer to the parve or lite kipa srugas? It's a demographic thing, it has to do with the fact that more and more boys and girls are learning in seperated yishiva / ulpana tichonit and not the old Mamad High, and also that the Hardals are publishing much more. The Hardal rabbis are 'out there'. The 'normatives' mostly do not have rabbis, and do not yet strive to strengthen the few famous ones they might have.

So my conclusion is that Hardal means you have a rabbi that teaches proper halacha, and the normatives do not look to rabbis for direction.

On the topic itself, while I think that the Haredis don't trust themselves and add more fences around the Torah, the national religious (not parve and lite) know that it is not good to sit next to the opposite sex on the bus since touching is inevitable.

Having lived in Beit Shemesh,(I know this is a generalization, but it happens to often not to question) Why would a Haredi man throw rocks at a bus with men & women sitting together or throw rocks at me because I'm not wearing socks (don't laugh, it has happened) BUT would not hesitate to take a tremp with me, a woman not wearing socks and only wearing one head covering?

Oh, my, they are demanding TWO head coverings also? I do this for my personal choice, but to stone women for not doing so is awful. Stoning anyone is awful. What is going on?
http://habayitah.blogspot.com/2009/07/what-is-going-on.html

Oh, my, they are demanding TWO head coverings also? I do this for my personal choice, but to stone women for not doing so is awful. Stoning anyone is awful. What is going on?
http://habayitah.blogspot.com/2009/07/what-is-going-on.html
Let me ask, what other 'groups' are instituting rigid demands?