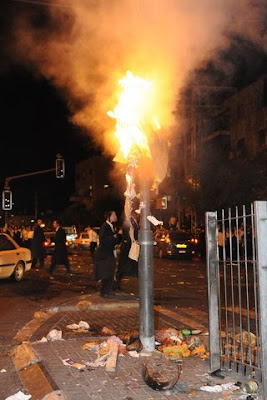 For the past 48 hours (and scheduled for 8 PM this evening as well) there has been mass rioting in Jerusalem over the arrest of a Chareidi/Ultra Orthodox woman from the Mea Shearim neighborhood, that police and welfare officials claim has been neglecting to feed her child.

Also Thursday, the Hadassah Ein Kerem Hospital rejected the haredi community's claims that the three-year-old child whose mother is suspected of starving him has cancer and had been undergoing chemotherapy.

"The child has not been diagnosed as a cancer patient and has not been receiving medications from the chemotherapy family," said Dr. Yair Birenboim, the hospital's deputy director-general.

According to Birnboim, the hospital's medical staff believes the child is suffering from malnutrition. "He is receiving an enriched diet, and I assume that once he recovers physically all the symptoms he has will pass. Within a few weeks, maybe even two or three months, he will be able to return to his family. We believe we saved his life." (YNET)

The Chareidi Community in Jerusalem feels they are wrongfully under attack, and that the woman did nothing wrong, let alone intentionally or otherwise, starve her child.

Israel has been rather brutal towards the woman and community in general:

Herzog: Child was saved from death

Is this brutal media treatment? Maybe not.

I guess the normal reaction should be revulsion; try to save the child, keep him as far away from the mother as possible, imprison the mother...(or send her for psychiatric observation...clinical testing -- maybe she has postpartum depression?)

Yet the Chareidi community overall supports the mother and family, which is why there has been mass rioting around Jerusalem (rather violent and messy as well). Are they living in a dream world, denying reality? Perhaps the police and welfare workers are wrong...and the child was sick (as the family claims)...

The following just appeared on the "Chareidim" website -- documentation that the child was diagnosed with a serious, terminal illness, which would result in...loss of weight (exactly the way the child appears now).

In summary, it appears the child suffered the past year from [disease removed from publication due to privacy] and appears to be towards the end [of a terminal illness]. The results of the long illness are drastic weight reduction and sever malnutrition"

Maybe the family's claims were right all along, and this really was a terrible case of anti-Chareidi propaganda?

Time will tell - I assume by Sunday, this case will be much clearer -- and the streets of Jerusalem will probably be one big nasty mess.

Whether the claims of medical malfeasance, misdiagnosis, are correct, there is no excuse for the rioting. That does help the situation, it only makes it worse. What on earth is wrong with these people (speaking as a haredi who has lived for a while in Mea Shearim)

The evidence is pretty strong that the child was not suffering from Cancer (which is the text which was blacked out) and he has been terribly abused by his mother.

But that is not at all relevant Nothing, but Nothing justifies the threat to life and damage to property (not to mention the Chillul Hashem and Disregard for 'Daas Torah") that is going on right now in Jerusalem (and of course RBS)

"Maybe the family's claims were right all along, and this really was a terrible case of anti-Chareidi propaganda?"
Maybe I'm unclear on the facts, but who is rioting? Wouldn't rioting make things worse? Or are they so influenced by their terrorist neighbors that they stoop to new lows to get their message across. Whatever the case, fires burning in Yerushalaim during the 3 weeks makes my stomach turn. Q: Are the Chareidim this generations Baryonim?

Rabbi Brody wrote about this on his blog, he had eyewitness views. It is terribly terribly insane. What are these manipulated hareidim think they are doing?

The woman was caught on VIDEO PULLING THE FEEDING TUBE FROM HER 'CHILD'. The child is now responding, gaining weight, and getting better. She need psychiatric evaluation.

The Israelis are not ALWAYS wrong!
I'm so tired of hearing about the abuse of our children. After all, they are our guarantors. What insanity.

You are missing alot of published information here.

These people are terrible and creating one of the worst "chillul hashem" imaginable. It's time Israel send them packing to Jenin where they can join their Arab brothers because that is how they are acting. I left Israel (was in yeshiva) a little more than a month ago but I wish I was still there so I can fight these anti-Zionist G-d haters. Disgusting and I hope the Charedi world does not suffer because of these animals.

I saw a certain neurologist of my acquaintance, the head of a prestigious childhood development clinic, who said that he saw the child a year ago and reported that the mother was suffering from a specific psychiatric syndrome. I do question his authority to diagnose someone publically, when he's not a psychiatrist. But I do NOT question his love of am Yisrael, ALL of am Yisrael. He doesn't wear a kippah but he's a believing man, and he has warm relationships with many gedolim. I do not feel this is "bashing".

I agree that rioting has only negative impact.

Jameel, I question the term "mass riots". I think it's a relatively small group (her particular flavor of chareidi) making a big BIG noise. Plus all the chevre looking for action.

I pray that we should all come to our senses. This is the wrong time of the Jewish year for any Jews to be attacking any other Jews.

I meant to say that I saw the neurologist quoted in the media and I believe he was also interviewed by Galei Zahal.

This is such a disgrace! It makes it appear to the world that Judaism is a crazy cult. Where men lose all capacity to reason. Instead? The rabbis fight among themselves, as they keep this stinking cult alive.

That the Haredi riot? They have no jobs. They're not educated enough to find work. They live by adopting the cult leader's initiatives. And, they never, ever, get in trouble!

How did it happen? Olmert, when he was mayor of Jerusalem, gave away the store. And, now? Jerusalem is a pit. And, the riots? What care to those cultists, that most of the world is nauseated at their behaviors?

Sorry, but it does not represent Judaism. It does, however, preclude saner people from finding comfort in their religion. Since this is the "denominator."

It's easier just to run away. Which is also motivates the Haredi. They become powerful flexing this insane muscle.

At least, in this case, a 3 year old's life was saved from the 'cult.' Shame on all of them. Israelis know the truth. But it's not something you can fix. Why these bums eat up so much tax money, however, is also part of the problem.

Carol Herman, haven't seen you post since you were banned from Little Green Footballs blog for your screechy anti-Semitic diatribes and constant cheerleading for Olmert's Gaza expulsion.

Um... am I the only one here who isn't convinced by a little strip of paper that could have been typed up by any bozo with an inkjet printer?

Where's the Hadassah letterhead, and the attending doctor's signature?