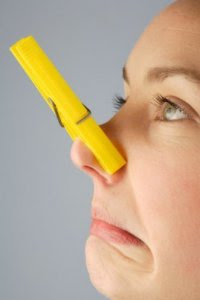 The photo at the left is the Facebook group's photo depicting their opinion of the video.
Over 167 people have joined this group so far (obviously, most of them Israeli), and their reactions on their Facebook wall range from calling for an immediate boycott of Cellcom, to a letter writing campaign to the government over Cellcom's "despicable" ad.

The voice-over at the end: "After all, what does everyone want, just some fun in life..."

I'm not a fan of the wall, (nor are most of my friends), but to turn this into a "racist" video is simply pathetic.

The Facebook group, called "I too got nauseous watching the new Cellcom ad," severely criticized McCann Eriksson's use of the separation fence in its advert.

"We could go into the media messages spouting racism any which way, but if you have come here than you too think they're uncalled for," reads the introduction to the Facebook group. "The McCann Erickson copywriter displayed an unbelievable propensity for bad taste."

The group also centered on what they feel is offensive in the new commercial, pointing out the fact that the supposedly "good" soldiers fear the possibility that the "monster living on the other side of the wall could steal the ball - but when the ball returns to Israeli hands, we discover that that monster isn't fierce at all, and actually feels like playing with the soldiers - oh joy!"

"Good enough reason to set up a beach party under the wall, complete with sexy female soldiers and musical instruments."

The group ends by demanding the immediate removal of the commercial.

"What our group can agree on is the shame we feel seeing a major Israeli commercial company approving such a beastly advert to be aired in its name, and which brings us to demand - take this racist commercial off the air immediately!"

PS: Lurker, do you remember when we played soccer with some Arab kids from Beit Jalla 25 years ago?

For Jewish Women of all ages. Consider a year at Nishmat in Israel.

The question is - why are they assuming that PALs are on the other side of the wall ? Maybe they are 'settlers' ? In which case maybe they are shooting themselves in the foot -

How can anyone oppose a wall that exists to prevent criminals from murdering innocent civilians.

Here in Texas we want a wall too to protect our cities from drug runners and gangs. But, evil as they are, these criminals have no desire to strap explosives to their bodies and blow themselves up to murder our citizens and children.

Only the most depraved can perceive that protecting oneself from murder constitutes "racism". Perhaps those critics will offer themselves up to the barbarians for their beheadings and sacrifices that their religion demands of them.

Heck, my reaction was just the opposite of the group you cite. I thought it was hopeful imagery.

Anonymous: Shows you're also a racist!

I would think the leftists would like this ad. It shows the soldiers realizing the palestinians are not such bad people and also just want to enjoy life.

I saw the ad and immediately thought they were kicking the ball to Palestinians on the other side. What settlers? Where? And what the heck is racist about playing football? Sometimes you Muqata people take things to a ludicrously ridiculous level!
Any Muqata protests against the Hamas tv program last week glorifying suicide bombing? Now there's a real human rights violation that needs to be addressed.

I agree with Rafi - it totally humanizes Palestinians - they're just trying to play.

If only soccer balls would come over the wall instead of missiles!

Great ad!
Also leaves me mystified at what the knee-jerk leftists have against the ad. It's certainly not racist or dehumanizing to Arabs - au contraire! - so their only complaint can be that it humanizes IDF soldiers. Heaven forfend!

Is there a Facebook countergroup supporting the advertisers? There should be! Anyone who knows enough Hebrew to set up a counter-group, please do so and pass on the word - we should be able to get 10x the number of sign-ups than the idiots who started the anti-soldier group.

I certainly do not identify with the Left, and I also find this ad offensive. It makes our soldiers look silly, like a ball will make them drop everything for a little fun; it makes the wall look silly, which it is not no matter whether you think it should or should not exist; and if it's trying to show that a ball can create coexistence, why don't they show the mystery people behind the wall?

I think it's a ridiculous and disconnected ad. The Mccann Ericksonn people should leave their air-conditioned Tel Aviv offices for a bit and go visit the wall. The we'll see if they feel like making a joke of it and our soldiers who patrol it.

Personally, I like the commercial. In Beit Lechem the stores used to carry Badatz candies for the kids travelling from Hevron. Now with 'Peace' they are blocked behind the security fence so that Jews can safely visit Kever Rachel.

I think the commercial represents the hope that one day there will be a solution and no need for a security fence or fear of war. How to bring this about can be debated and is worth fighting for. To take one measly minute to focus on the dream/goal is a refreshing change.

It also reminds me of this other great commercial.

I don't think the ad is racist, and I don't think it says anything about the IDF. I do think it's spectacularly tasteless and shows a massive mental disconnect between the offices of the advertisers and the real world.

Even if you are in favour of the separation barrier and it's route, there is no doubt it has caused a great deal of suffering and to employ it as a branding tool is gross.

It would be akin to Fox or some other fashion chain saying to themselves during the disengagement, "oooh orange is all the range this year, lets have a bunch of models dressed up as kids from gush katif in Fox jumpers!"

What was the Hebrew word they used for "racism"?

In order for something to be "racist" it has to show a certain ethnic group in a negative light.

Thanks Jameel, for posting the ad. Since I don't have a TV, I otherwise miss these gems. Kol hakavod to Cellcom!

Gail, the wall is not the answer. It is only a precursor to mesirah {handing over to goyim} Jewish property conquered and bought, a big prohibition in the Torah, one which supersedes possible harm to Jewish lives {Mishnah Torah Hil. Hovel u'Meziq 8:9}

I didn't make the connection to cell-com, but I thought the ad was cute. Reminded me of the video that was posted of the border guard dancing with the kids on the other side of the fence. By the way ehwhy, thanks for the "Blue" link--typical Canucks--Labatts and Hockey. I liked that one too, so shoot me.

I'm with Rafi G and also with Miriam.

I don't get the uproar. I think the ad shows that everyone's human, and "they" like to play and have fun just as much as "we" do. It's cute.

I certainly don't think the wall is cute, but is this any different than creating an exhibition of the work of some of the amazingly talented artists who have graffitied the wall?

Even Yariv Oppenheimer of Peace Now thinks it's a good ad!

Shaul: Uh oh. Maybe I should take the post down?

Back to the cell phone ad -- I think the ad is a trifle silly, but at least they found cute guys to act in it.