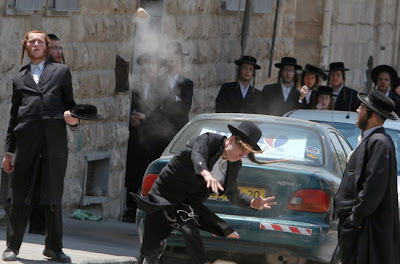 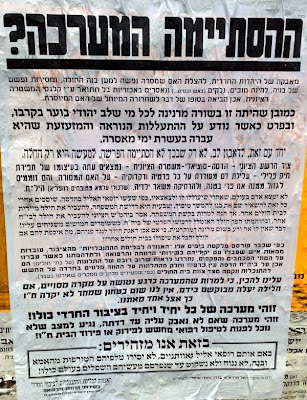 This past shabbat, many people asked me about my posting concerning the Ultra Orthodox riots in Jerusalem this past week -- resulting from the alleged "deliberate starvation" of a 3 year old child by his mother.

Many asked me - "Why defend them" -- many commented, "Their riots are a Chilul Hashem" and "the mother should be locked up."

So, I would like to clarify a few points.

1. My oldest teenage son couldn't stop ranking on the Chareidi behaviour and riots. My wife replied to him very clearly: "Don't generalize." I wasn't defending the riots -- my only point was perhaps their was more to meets the eye in the mother's actions.

2. As you can see from the pashkevil/posters alongside this post, Hadassah hospital is clearly indicted by the Chareid community as having plotted this entire episode (including all sorts of really awful condemnations). 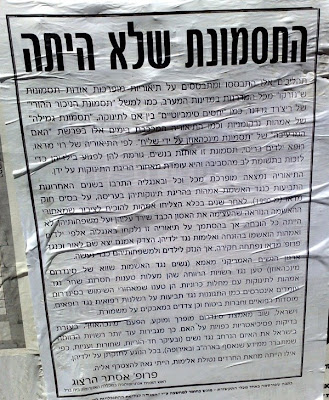 3. A friend of mine from Hadassah hospital stated unequivocally that there hospital's medical allegations of the child's treatment are true.

5. In addition to the vandalism and rioting, one of the most disturbing aspects of this story is the behavior of the Jerusalem Police and Jerusalem's Welfare/Social services department. This entire story could have had a different ending had an investigation into the mother's health been conducted prior to the media circus that the "mother intentionally starved her son". While this could have been done tactfully, someone decided that a show of force would be the best way of handling the story. 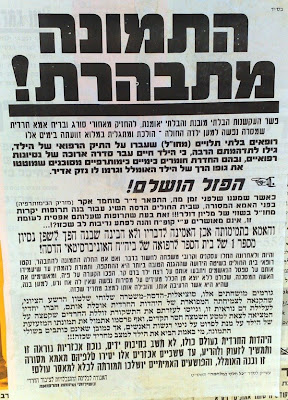 When you force any community that already feels threatened -- and push their back against the wall, the reaction is usually violent. Yet that's how Israel's police loves to handle things --Amona, outpost evictions, Gush Katif, and now this story as well.

The police takes pride in violent, physical, and hyped up circumstances -- as a means of warped public relations, showing that "they are the boss."

This isn't a new concept. Previous Labor (and then Kadima) Member of Knesset Chaim Ramon was asked on Ted Koppel's nightline show about the passive civil disobedience protesters in 1995 -- who opposed the Oslo process. Ramon unashamedly faced Koppel and said, "we will crush them."

"Crush them" -- what a lovely way of dealing with those you disagree with.

And turning this story into a media circus, publicly accusing an obviously sick woman of intentional criminal behavior, without even obtaining the court ordered psychiatric evaluation of the mother prior to her arrest -- snowballed into the mess we now have.

Jerusalem...and Israel have enough problems as is -- a tiny bit of "sechel" is needed, especially now.

The riots need to stop. The mother needs psychiatic evaluation. The police and social workers need to get a clue about PR.

Update: There have been 2 cases today of Chareidim who refused ambulance medical transport to Hadassah hospital, and insisted on going to Shaarey Tzedek instead.

Right. And those riots about municipality opening the parking lots for tourists? They just feel threatened! It's not about violence. They're just with their backs against the wall on this.

There's no need to generalize. As any community, Haredis have their good and rotten apples. However, no words from any rabbi attempting to calm the situation during the riots didn't help.

Why would a hospital make up such a story in the first place? Things like this make Israel seem a pretty scary place for those of us still in the diaspore.

TMI: What does the parking lot have to do with this woman and her son? Both are riots, both are wrong.

Devorah: The hospital didn't make up a story -- there's nothing scary about the hospital.

There definitely is a spiritual/Torah mussar haskel in this whole sordid event for us to take to heart during these very auspicious days.

3. A friend of mine from Hadassah hospital stated unequivocally that there hospital's medical allegations of the child's treatment are true.

And seriously, the police are macho idiots because there's a culture of glorifying macho idiocy in Israel. The whole place sometimes seems like a giant boys' locker room.

geez, how funny and silly do that ultra jews look ahhahaha

What a sad day that a cultist outfit, originally from Brooklyn, New York, can gain such notoriety. And, then it seems no Jew steps forward to even call a spade a spade.

Their entire group comes into the hospital when one of their members falls sick. They have no problems intimidating staff. Except? Here, we can call on security. Security keeps controls in place.

While Hadassah Hospital has to defend against cult leaders? David Korish and Jim Jones never had it so good!

Don't tell me these people are orthodox! They are not! They are brain washed. Their rabbis fight among themselves to see who can lead more bandits around by the nose. And, the men never have to go out and work. Never have to support their families! Never have to learn about family planning. Or condoms. Or even learning how to get along in public spaces.

The price has been high.

It's been two decades since presidents, promising to build the American Embassy in Jerusalem, have even scratched the surface. (And, the reason the Embassy will never be built in Jerusalem? The Haredi.) There's enough clout among diplomats NOT to want to be in a city where the Haredi can decide if they're going to park themselves on your parking lot. Or not.

Oh, by the way, some of these "rabbis" intermarry cousins. Because what "counts" is the size of the cult. And, just like Hare Kirshnas, who used to invade airports, to shake down travelers; what the Haredi do is send their youngest children to shake down tourists coming to visit Jerusalem.

You think everything is honkey dory? No. It is not. The woman in question is mentally ill; and has already refused a court-ordered psychiatric test.

This is NOT orthodox Judaism! I lived in Brooklyn, New York. I grew up in a neighborhood where Orthodox and Conservatives lived. And, pretty much everyone knew the name of the local rabbi.

The "click" of Haredi (Hassidim), for the most part remained apart. Following their rabbi. And, not allowing anyone within the click to even think for themselves.

You know, sometimes, these mishuganas throw their own children out of their families. And, they wander the streets of Jerusalem, homeless.

It does not reflect on you, where you have to lie about what you know. Cults are cults. They're very distructive.

And, the price tag from these "boychicks" from Brooklyn is proving to be enormous.

One starving little boy? Just the tip of the iceberg.

"Relativism." When there's nothing relative, here, to see. Just a bunch of freaks who terrify the municipality; pulling a typical stunt to keep the city from taking appropriate actions.

Now? Either way. You lose.

Let me add a tidbit. As you know Israel counts on tourism to help its economy grow. I'd bet its no surprise to any Israeli, that it's good when Jews travel. And, come to Israel to visit.

A few years ago, however, I saw a strange statistic. Here it is. Jerusalem sees too many tourists coming in and leaving, without even spending the night.

You think this is a secret?

Personally, I beleive there are a number of problems with this whole story -
1) The police like to show who is boss - as Jameel put it. Generally using violence. ( I once heard a joke saying - if you see a policeman with one strip - it means he can read, two strips - he can write, three strips - he knows someone who can read and write - no offence intented)
2) The behavior of these charedim is a complete hillul hashem. They are causing many many people who had a lot of respect for them to lose it. - This is because many people see people in black hats throwing stones - so they assume that all people in black hats throw stones - when of course this is not the case.
3) The media - the media loves a story like this - especially the non-religious extreme left media - like we have in this country. So they generally go on and fan the fire.
What needs to be done now is a number of issues -
1) The media needs to back off - and let the story lie low. Even if there are demonstrations - push it to the back pages.
2) The Rabonim need to advertise in all newspapers and on national TV - that they want the violence to stop. In addition - putting up posters stating this violence should stop would also help.
3) The police - need to admit that they too made mistakes in the handling of this case - and next time will attempt to be more dignified in the handling of these matters.
Tomorrow we start the nine days leading up to 9'Av. The Bet Hamikdash was destroyed due to Sinat Chinam - lets not purpetuate this sin.