An Illegal Outpost Story
By JoeSettler, Jameel, and the Zionist Enterprise.

The Settlers faced a fateful decision.

The law prevented them from buying and acquiring land in Eretz Yisrael. Jewish growth in strategic and historic areas was coming to a standstill, if not an end. Arab violence made the roads, towns and fields dangerous. What the Jews didn’t physically claim, the Arabs would subsequently move in and claim for themselves.

And worst of all, fellow Jews were snitching on the Settlers to the authorities.

The entire settlement enterprise was in danger of destruction.

Ideas were raised on how to fight these immoral laws and dangers to the Settlement enterprise.

But there was dissent. “Dina d’Malchuta Dina (The Law of the land) -- It's forbidden to go against the law of the government," some said, not understanding that this Jewish law never applies when the government’s law goes against Jewish Law – or according to many if not most opinions, that this doesn't apply in Eretz Yisrael at all.

“But there are Arabs who will claim the empty, untouched and uncultivated land as their own,” said others, ignoring that the Arabs could bring no proof or claim– not even a tax receipt going back 50 years. Their hollow words, were their only "proof of ownership", though they never owned the land at all.

“But the government won’t even recognize our right to purchase the land, or our deeds to the land,” said others, “much less our right to build on it. We shouldn’t do this. We'll lose what little legitimacy we have left.”

And among the Settlers there was concern that those who raised their voice in dissent, while claiming to not be in league with the enemy would actually run to report the Settlers' actions at first opportunity – as some had done in the past.

So a plan was devised.

“Illegal outposts” would be built throughout the land. It would be done quietly and at night. At morning’s light the Arabs would find strategic hilltops taken. The government would be confronted with facts on the ground.

The Settlement enterprise of Eretz Yisrael would be saved.

So it was decided to build these “illegal Settlements” in utter secrecy with the element of surprise... 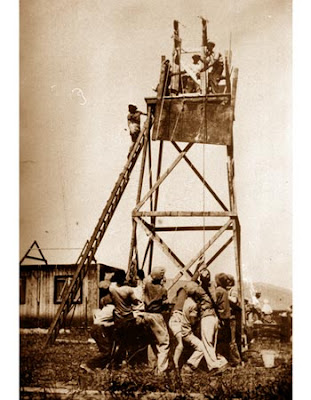 The year of the above story took place in 1936, the government was Britain, and the results were that over 50 "illegal settlements", Tower and Stockade (“Homa u’Migdal”) settlements as they were called then, were established practically overnight (over a period of 3 years) in the Galilee, Beit Shean, and the Jordan Valley.

No one calls for their destruction anymore.

No one questions their legality anymore.

No one questions how important they were to the Yishuv.

But even then, as today, the move to inhabit and rule in the land of Israel was attacked and subverted by foreign governments, Arab violence, and Jews who would betray their own.

As US President Obama's proxy, George Mitchell arrives in Israel to turn the thumbscrews on the Israeli government to halt all Jewish Settlement building -- 11 new outposts will be built in the Land of Israel today and tomorrow.

Join the Settlement Enterprise -- for the sake of Israel's Future. 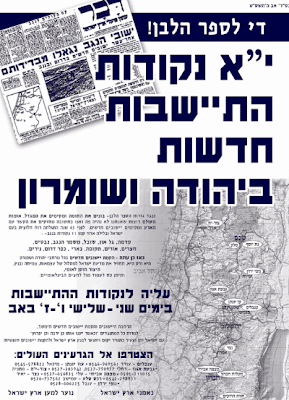 Tisha B'Av evening Wednesday, July 29 - join the Women in Green as they March around the Walls of the Old City of Jerusalem. But first the reading of Eichah will take place in front of the US Consulate on Agron Street at 8:00pm.

As US President Obama's proxy, George Mitchell arrives in Israel to turn the thumbscrews on the Israeli government to halt all Jewish Settlement building...

I much prefer the title that Caroline Glick bestowed upon Mitchell -- His Majesty's High Commissioner for Palestine.

For a film about Tower and Stocade, watch "Built in A Day" about Kibbutz Tirat Tzvi.

Do you think that born-again frummers from Brooklyn have any more right to the land than people who have lived there for a long time?

Anonymous: Why not re-read the story.

"But there are Arabs who will claim the empty, untouched and uncultivated land as their own"

The vast majority of the settlement hilltops are on empty, untouched, uncultivated land STATE land.

No one has "live there a long time."...till the Jews showed up to reclaim it.

I'm not from Brooklyn, not born again, and not a "fummer"...yet I proudly live in a settlement.

And we didn't evict anyone from our hilltop to build our home...unlike most of the leftist kibbutzim and Ramat Aviv neighborhood in Tel Aviv which did.

An excellent reminder of how the Land was built.

For those of a more experiential nature, there is a museum devoted to the Tower & Stockade settlements in the Gan Hasholosha national park, which includes a full-size replica of Tel Am (now Nir David), which was the first of this type. See http://www.gemsinisrael.com/e_article000002701.htm and http://www.hagshama.org.il/en/resources/view.asp?id=1509 for more info.

Chanan: Is that near the "Sachneh"?

Jameel: It's very near-that's the Arabic name for the park.

Is that the forerunner of the Tower of Babel?
Or, are all those guys trying to hoist themselves up to the top - when there's a ladder on the other side?

Forgive me, I'm totally on the side of the "Builders of the Land of Israel", but the picture just prompted a funny response.

Thank Outbrain that I was able to catch this post.