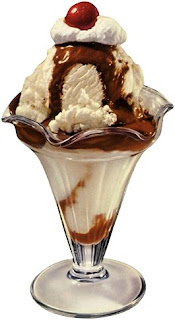 Unlike the USA, Israel's shopping malls are chock full this summer despite the global recession. The Eastern Kfar-Saba newly opened "G" mall is packed with shoppers on a daily basis and impatient patrons wait for empty tables at G's trendy cafes.

And yet, Dun & Bradstreet economists have the gloom and doom -- they're predicting a drop in Israel's ice cream sales for the summer of 2009.

According to estimates, ice cream sales will range between NIS 950 million (about $245 million) and NIS 1 billion ($257 million) – a slight drop in sales compared to last year.

According to sources in the ice cream industry, the recession in the economy will have an effect on the ice cream market, prompting the Israeli consumer to buy less prestigious ice cream brands and raise the demand for simpler products. (YNET)

You may not know it, but Israelis are a huge consumer of ice cream, and in the past decade, Israeli ice-cream consumption has gone up a blistering 420% -- and during summertime, Israelis consume an average of 20 million liters of ice cream.

I'd better quickly dig up some better news -- as it doesn't get more depressing than this.

What, a glida slump? What is this world coming to?

Last night, the 6th of July, I was on Ben Yehuda in Jerusalem. Ice Cream was selling briskly, all three stores had lines, tables all over had people chomping away...

Those choco-banana pops would prompt me to do my part to help the recession lift.

Spread the love and help me buy a cone!