More than once on these pages I've said that Israel must attain financial independence from America. That loan guarantees and US military aid may look nice, but are stifling our national growth and industries and other important decision processes.

The biggest profiteers from US military aid to to Israel are US military industries which is where the money must be spent.

I've repeatedly said that Israel must develop a fighter plane, and must sell it to India, a fellow democracy, and natural ally with a similar (recent) history and similar enemies.

Turns out Israel was planning to do that.

Saab (they make great cars) asked Israel to join with it to make a fighter plane and sell it to India.

Israel would design the electronics, radar and electronic-warfare systems for the plane (ours are much better than the Americans, which is why Israel only has Israeli electronics in the fighter planes we buy from the US). 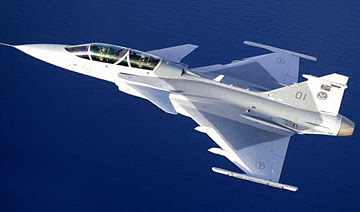 The deal was worth $12 billion dollars for 120 aircraft.

Imagine that money coming in to Israel, instead of from US military aid that goes right back to US industries.

The US imagined that too.

The given excuse? They are afraid US technology might make its way to India.

Meanwhile, Lockheed Martin and Boeing (US companies) are competing to send US technology over to India.


If this keeps going on, foreign countries are going to be afraid to work with Israel, if they know the US will kill the deal - as they have already done numerous times in the past.

It's time Israel makes a decision to cut the apron strings.

Israel survived without US aid til 1967 and Israel was far weaker then. The aid is like a narcotic that saps Israel's strength and distorts its self-image. Being healthy means cutting the apron strings. And Israel can conduct her relations with America not as a supplicant but as an equal. Its time to change the nature of US-Israel ties.

Agree with you 100% - I have been saying that for years - ever since they (US) cancelled the Lavi project - it was destined to be better than the F16.

For once Joe Settler, I fully agree with you.

And it kills me when Americans whine in the talkbacks in the NYT about all the US military aid we get- when it gets spent right back in the US! When my husband was in keva, he said they had to store massive closets of American toilet paper and they all got random American military stuff like Tshirts that said "Air Force" on them. All thanks to that great US military aid.

Amen, Joe and the three commenters above!

You know, the Pope never knocks the money people throw into the collection plate. (And, as my mom would have said,"the poor people's donations made for these spectacular sights. People walk in and realize "their pennies" made it possible.)

So, no. I wouldn't knock military cooperation. It's going to continue, whether you like it. Or not.

Meanwhile, you don't need the latest toys to win battles. You need to be swift on your feet. And, it's also proving possible that you don't have to "love in." Win. And, get the heck out. Let those who remain on the ground figure out what directions they'd care to move into.

Also, hidden from view is the fact that arabs hold opinions, too. Most of them hate those labeled "palestinians." They think of them as unable to make a go of anything. Of course, this is said "privately."

You want reports? Won't be any.

You want Israel to be independent? She is! And, you should be proud that Bibi isn't discarding anything valuable.

As a matter of fact, a number of US presidents discovered, to their chagrine, that they lost their legacies; backing the Saud's.

Lincoln taught the lesson: You just can't fool all of the people all of the time.

And, in the alliance with Israel? Believe it or not the benefits to the military, in the USA, could fill books.

You think Dayton's learned much from the arabs in the West Bank? Why do you want to pull my leg?

Get the wrong set of influences; and it's just like Bernie Madoff proved to his investors: YOU LOSE.

You want corrections? Our of the American Congress? The donks in charge "misjudged" the economy. Jobs have been lost. There's no recovery in sight.

"...ours are much better than the Americans."

Can you back up this claim about avionics? I doubt your claim.

Israel can get US avionics included in their platforms, and they have them removed and replaced with Israeli avionics.

We remove the electronics for a few reasons;
1. No risk of an American kill switch and makes it harder for the US to track us.

2. Easy integrations into Israel other systems

3. Improved performance for our particular battle operations, in other words better electronics.

The Lavi is alive and well, flying the skys of China.

I don't know what, but something has got to be done. Bibi has mentioned numerous times that he would wean Israel off of American "aid" but he has not. This is really the number one issue that needs to be addressed. There is some movement towards cutting the apron strings in Israel, but not enough.

If you look at it, though, maybe Obama is really a blessing - will finally push many Jews to realize they are Jews, and act like it - and pretend to be Europeans in the Middle East (or in their armchairs in the states).

LB: On the contrary, in his previous terms, Bibi implemented a phased plan to end all US aid (but not yet military aid).

We were almost there!

The aid was reduced annually, and it would have been gone already, but then around 2 years ago Ehud Olmert met with Bush and got it all reinstated!