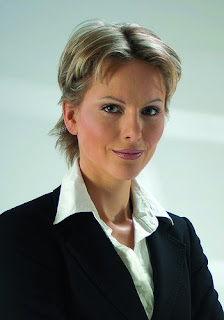 Mazal tov - congratulations to Member of Knesset Anastasia Michaeli (Yisrael Beiteinu) on the birth of her 8th child, a son, this early this morning. MK Michaeli is the first Israeli parliament member to give birth during Knesset tenure.

As opposed to less than clever Members of Knesset we've seen in the past few years, MK Michaeli holds a Masters degree in Electrical Engineering, and a BA in Business Administration.

"I feel fine. The delivery was very swift," Michaeli told Ynet. "I'll leave the hospital and then decide what maternity leave to take."

Asked about the new parliament child's name, the MK replied, "I'm having doubts about the name and consulting the rabbi."...

In the current legal situation, a Knesset member is not defined as a worker and is therefore not entitled to maternity leave.

"It's clear that the right given to any workers, which is aimed at allowing her to rest following the delivery and nurture the bond between the parent and child, should also be granted to Knesset members," the committee members stated. (YNET)

From this article http://www.haaretz.com/hasen/spages/1088705.html I see she was born non Jewish. I didn't get the sense she was actually frum. So is she actually Jewish?

But that's the point. If she is not frum, and never was frum, how exatly is she a giyoret? The interview with her in Haaretz gives no indication that she was frum at any stage. Again, I am not claiming any more knowlege than what is in that interview, but given she is not frum now, it doesn't look good, unless you know something that I don't.

Are you Rabbi Sherman?

Yes, sure. And you must be R Drukman. fancy meeting you here.

"Yes, sure. And you must be R Drukman. fancy meeting you here."

That's hard to believe. R' Druckman actually cares whether his converts-to-be are observant or not (though recognizing he can't control everything they do in private).

I don't know how observant MK Michaeli is, but she is definitely "traditional" and keeps a kosher home (according to her).