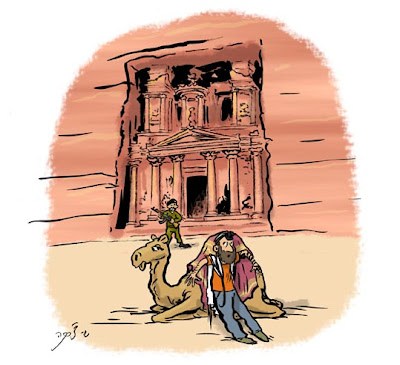 (Cartoon courtesy of Shay Charka)
Despite the peace treaty signed between Israel and Jordan, last week Jordan refused entry to 2 Israelis -- claiming that their religious items of a Tallit [Jewish prayer shawl] and Tefillin [phylacteries] would jeopardize their safety in Jordan. After leaving their Tefillin with a friend at the border crossing, Jordanian border authorities once again denied their entry, claiming that the man's beard, and his son's peyot [side locks] and large kippa would endanger their security in Jordan -- and they were forbidden entry to visit the East Bank of the historical Land of Israel.

Hagai Segal commented about this phenomenom in Friday's Makor Rishon newspaper -- apparently the peace treaty between Israel and Jordan is only between secular Israelis and the Hashemite Kingdom. If you happen to sport a beard, kippa, or want to bring in private religious articles for prayer, then "peace" doesn't apply to you.

Similarly, the Palestinians refuse to accept Israel as a "Jewish" state -- secular would be fine, but anything that smacks of Judaism or Jewishness is apparently not applicable when it comes to "peace."

When asked if he could visit Jordan in a month’s time, the Jordanian Consulate told him, “No problem. Just leave your tefillin, prayer shawl, and kippah (skullcap) home.” Israel’s Foreign Ministry says that they are aware of the phenomena and reject the security-risk claim.

The Foreign Ministry said that it is aware of prior incidents of this nature, adding that it rejects Jordanian claims that the traditional Jewish prayer items pose a threat to the country. (ViN)

Looks like I'm going to have to wait a while before I can visit Petra...since the peace doesn't apply to Jews. 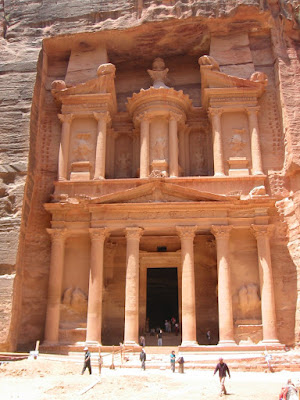 Why would any want to visit and support the economy of a country with such attitudes towards us?

It really pains me to see such an article as if the people of Israel don't understand that their identity in any arab country could really put them in danger. The hashemite kingdom's decisions is a rational and wise decision to protect the people's of israel safety in their country. That is peace my friend, its the concern for your safety..