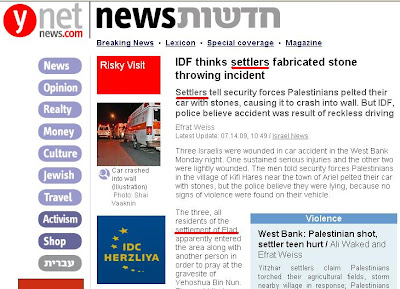 Last night, 3 Israelis tried to get to the tomb of the Biblical Jewish Leader Yehoshua Bin Nun in the Arab town of Kifel Haris.

Normally, one needs IDF approval to visit the location, and the IDF opens the site a few times a year.

These 3 individuals from the town of Elad, near Rosh Haayin in Central Israel decided to visit without IDF authorization, and apparently got into an accident on the way out and the IDF believes then men blamed a non-existent Palestinian rock throwing attack for their own reckless driving. [Jameel adds: Palestinian Rock and molotov cocktail/firebomb attacks are on the rise, and I was hit by a few rocks 2 nights ago, damaging my car.]

YNET jumps on the bandwagon, and immediately labels the 3 Israelies as settlers, despite that they live in the town of Elad, in pre-1967 Israel.

But why should the YNET factcheckers care, when its a good excuse to slanders settlers for stupid behaviour, regardless of whether settlers were even involved in the first place.

Interestingly, in the Hebrew version of Ynet they blame "Israelis" which is rather more accurate.

I find it ironic that while Yidiot is anti Jewish and anti settler, and glorifies successful intermarried yordim, that most of those who post on it are on the right.