Ben-Gurion's historical litmus test for a "normal" Israel would be the appearance of a Jewish thief in Tel-Aviv. Based on Ben-Gurion's hypothesis, Israel is now a stunning success.

On Sunday, the Israel Police have arrested 10 residents of central Israel on suspicion of being involved in a wide-range, worldwide scam known as the “Nigerian sting”.

The suspects operated out of offices in Tel Aviv offices and allegedly defrauded elderly American citizens, who had been led to believe they had won the lottery, of millions of dollars.

You've seen these Nigerian scammer emails before -- they originate from deposed kings of third world countries, Suha Arafat, and even Ehud Olmert.

"According to the suspicions, the gang members spent the past two years contacting elderly people in the United States. They would present themselves as representatives of the US lottery’s raffles department, informing them they had won a prize consisting of $500,000.

The suspects claimed they were calling from inside the US, when in fact they were operating out of an office in Tel Aviv.

Upon every first call with a new victim, the suspects would explain that a law firm specializing in raffles taxation would be handling the “prize”.

After a while the victims would receive a second call from the gang, in which one of the suspects would pretend to be a lawyer. At this point he would explain to them that they must pay a preliminary tax on the sum of $67,000 in order to receive the prize money." (Jewkey).

Yet the biggest apparent scam of week goes to "LifeKeeper". Respected journalist David Shamah reported this week in Arutz Sheva about the "Billion Dollar Patch" that could warn of a heart attack 30 minutes before the actual heart attack would commence.

"An Israeli company has sold a one-third interest in a medical device it developed to a British-Taiwanese company for $370 million – making the total value of SafeSky's LifeKeeper Patch over $1 billion.

The deal, between SafeSky and Micro-Star International (MSI), is one of the biggest ever in relative terms for an Israeli hi-tech industry. SafeSky will retain 67% of the ownership of the patch, and MSI has an option to purchase a bigger share later on – at five times the price it paid this week.

The LifeKeeper Patch, not much bigger than a shekel coin, contains a microprocessor which can read information about the wearer's medical state – recording data such as body temperature, heart rate and rhythms, blood pressure, and blood sugar levels. When the patch is worn, the information is transmitted via Bluetooth to a cell phone, where an application records the information.

The LifePatch, which was developed by SafeSky co-owner Arik Klein, is considered a revolutionary "teletherapy" device. (Read the rest of this here)"

What started out as a snowball of success on Sunday (including President Shimon Peres gushing about the success of the patch) is now hurtling out of control, as all sorts of dark clouds of suspicion are poised to rain on the LifePatch parade.

For starters, SafeSky co-owner Arik Klein is less than an honorable man. The JPost and Israel IDF radio report that "...the supposed deal appeared to have unraveled when it emerged that one of the partners in the company, Arik Klein, who has served prison time for fraud, forged e-mail correspondence in which he pretended to represent MSI in the purchase."

Haaretz reports that Klein, a convicted conman who spent years in prison for multiple acts of fraud, is also the person who supposedly developed the technology. It seems that Klein bought and registered the domain name and used fictitious identities to correspond with SafeSky, and its lawyers and accountants.

IDF Radio queried as to why there are no cardiologists on the "SafeSky" staff, and that no medical data has been published and no preliminary scientific data has been provided to back up SafeSky's claims for this "revolutionary" patch.

Adding even more intrigue to the plot, the JPost also reports as follows:

The plot thickened when it was discovered that Haggai Hadas, the former Mossad official recently appointed to head negotiations for captive IDF soldier Gilad Schalit, is a director of SafeSky, and that its CEO is Gabi Picker, a childhood friend of Prime Minister Binyamin Netanyahu.

The Prime Minister's Office issued a statement on Tuesday saying that Hadas's "private affairs, including his business activity, are his personal responsibility and are carried out with his knowledge alone, and are entirely unrelated to his public role."

Is LifePatch the next best medical invention since the defibrillator, or will it go down in history as a competitor of agel?

Personally, I think this will be more similar to the fiasco in the 1980's in which Israel's energy minister announced that a world-breakthrough had been made by an Israeli scientist and would generate enough electrical power for the price of peanuts. (Still looking for a good hyperlink source on this. I believe the Minister was Dan Meridor's father). This should not be confused with Yitzchak Teshuva's adjournment today:

The natural gas reserve discovered off the shores of Haifa is approximately 25 to 30 percent richer than previously assessed, US oil operator Noble Energy Inc., said after drilling to verify the find.

The site, previously assessed to hold more than 142 billion cubic meters (BCM) of natural gas, may in fact hold as much as 180 BCM.

The potential revenue from selling gas from the offshore reserve may reach $30-35 billion. (Jpost)

HAHA! I've found it -- previous scam of the century: 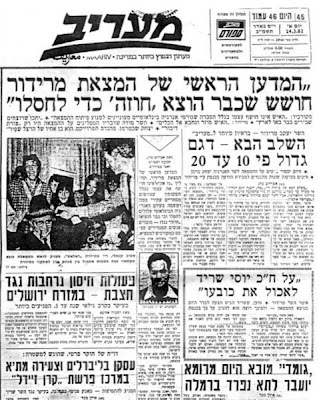 The bulb to light all Ramat Gan (Hebrew: נורה שתאיר את כל רמת גן, Nura she-tair et kol Ramat Gan‎) was a political misstep in Israel of the 1980s. It took this humorous form within the collective memory of the Israeli public.

On June 28, 1981, the eve of elections to the tenth Knesset, Yaakov Meridor gave an interview to radio networks. He was one of the top candidates on the party list of Likud. He announced that a scientist working with him had invented an improvement in energy production on a chemical basis, with extraordinary efficiency and yield. As an illustration of the nature of the invention, "a global revolution that is yet to be grasped", he told to an interviewer, "It's as if you took an ordinary household light bulb and, with this lamp, you illuminated the whole city of Ramat Gan."

In March 1982, while serving as Minister of Economics and Inter-Ministry Coordination, Meridor gave publicity to the invention in a special television broadcast. For a few days he captured the top newspaper headlines. When it was revealed that the inventor might be brought up on charges, the minister was held up to ridicule, and the incident was mockingly recalled for years afterward.

On the Nigerian scams, you might have a good LOL, even a ROTFL or two, from the scam-baiters at 419 Eater... enjoy!

Shaul: Thanks for the link :-)

One of these days I'll publish the email exchange between a Nigerian Spammer and Jameel from the Muqata in Ramalla.

"One of these days I'll publish the email exchange between a Nigerian Spammer and Jameel from the Muqata in Ramalla."